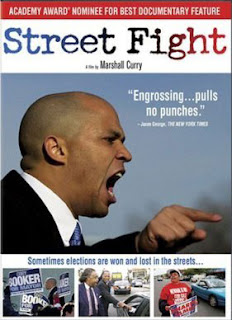 The subject of this movie review is Street Fight, a 2005 documentary film from director Marshall Curry. The film received a best documentary film Oscar nomination and was also aired on the PBS series, P.O.V.

In 2002, documentary filmmaker Marshall Curry followed Cory Booker, a candidate for Mayor of Newark, New Jersey, taking viewers behind the scenes in what turned out to be a cutthroat 2002 mayoral race. Booker, a Newark city councilman, was an Ivy League upstart who’d only won a single political race prior to his 2002 mayoral campaign – that of the city council seat he held at the time.

The incumbent Sharpe James was a four-term, old-timer who represented the old-fashioned political machine’s way of running a political campaign and managing a government. That old political machine will try to win by any means necessary. James was the undisputed king of New Jersey politics, and some called him a “king maker.” James was also not above using down-and-dirty tactics to win, and he was not above bringing forth race and skin color as divisive issues he could use to defeat his opponents.

Booker and James are both African-Americans, but Booker has a lighter skin complexion than James. James, who at the time of the film had been in politics for 32 years, was one of the politicians that enjoyed the first fruits of the hard fought Civil Rights battles. Booker, on the other hand, represented the new generation of black leaders born after the Civil Right movement. These young African-Americans want to bring new ideas to government, and race (skin color, ethnicity) is less of a factor in how they run their campaigns, manage government, and operate in the public arena. Just being one of the father’s of Civil Rights or being a first generation beneficiary of the movement doesn’t make one untouchable or above criticism from these young black leaders.

Such an attitude rankled supporters of Sharpe who saw Sharpe and his career as the epitome of the struggle for civil rights and what the movement wanted to achieve. So Booker, who wasn’t born in Newark (whereas James was) was seen as an outsider. James encouraged that sentiment and went so far as to suggest that Booker wasn’t black or, as a light-skinned Negro, not black enough. James also liked to accuse Booker of being Jewish (he’s not) and a lackey of right wing, white Republicans. Booker often struck back by pointing out Newark’s problems and how the city had languished under James’ stewardship.

Raising hard questions about American politics, race and racial identity, and democracy, Street Fight earned a 2006 Academy Award nomination (“Best Documentary, Features”) for its story of a bare-knuckles political race. Marshall Curry’s brilliant follows it all, letting his camera record something uniquely American and rarely shown to the country at large – an inner city political campaign in which two black candidates go after each other for blood. The film’s one flaw is that Curry deliberately avoided covering the issues and focused on the “street fight.” Curry has said in interviews that in the battle, in which both men went into the neighborhoods of Newark canvassing for votes and feting voters, he saw the true story. It’s debatable if issues such as poverty, gang violence, municipal construction, etc. weren’t as important.

Still, anyone who likes politics and documentaries will find that Street Fight is a gourmet meal and a lavish dessert in one.

Posted by Leroy Douresseaux at 3:02 PM