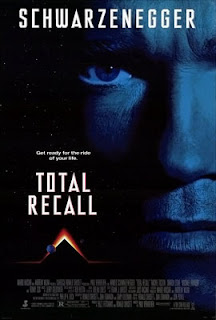 The subject of this movie review is Total Recall, a 1990 science fiction action film from director Paul Verhoeven and starring Arnold Schwarzenegger. The film is loosely based upon Philip K. Dick’s “We Can Remember It for You Wholesale,” which was first published in 1966. The film follows a man who accidentally has memories dredged up of a life he apparently had on Mars, which only gets him marked for death.

Total Recall opens on Earth in the year 2084. Douglas Quaid (Arnold Schwarzenegger) is a construction worker who yearns for more in his life. He is also troubled by dreams of Mars; in fact, he is obsessed with going to Mars. His wife, Lori (Sharon Stone), wants a different vacation, so Quaid decides to get a vacation to Mars in a unique way. He goes to a company called “Rekall,” which promises to implant memories of a virtual vacation. These false memories will seem just like real memories to Quaid.

However, something goes terribly wrong during the procedure to implant the memories in Quaid’s brain. Suddenly, his visit to Rekall is apparently the reason gun-toting men, led by the ruthless Richter (Michael Ironside), want to kill him. Quaid discovers that he has to get to Mars – for real this time – as soon as he can, because all the answers to his shattered memories are there… he hopes.

I believe that the Dutch-born filmmaker, Paul Verhoeven, does not get enough credit as a terrific director. This is because the amount of violence in his film is seen as excessive by some critics. Indeed, Verhoeven’s science fiction films, Robocop (1987) and Starship Troopers (1997), both contain copious amounts of violence, some of it so intense and gory that it made me cringe when I first watched these films.

However, there is also a strong undercurrent of humor in Verhoeven’s science fiction films. Some of it is black humor, but some of it mocks militarized institutions, such as corporations (Robocop), governments (Starship Troopers), and governments that are really corporations, as in Total Recall. Verhoeven and his screenwriters find absurdity in how such institutions are singularly focused on their goals and treat their employees, as well as others who get in their way, as expendable. This film is practically a metaphor for our modern resource wars and for people like the Neocons (best exemplified by former U.S. Vice-President Dick Cheney and mustachioed toad-humper, John Bolton).

Total Recall also received a Special Achievement Academy Award for its visual effects, which is usually a competitive award, but not in 1991. The special effects for the other films in the visual effects category simply did not match up to the effects in Total Recall. Thus, the committee that oversees this award for the Academy of Motion Picture Arts and Sciences (AMPAS) simply gave the award to Total Recall and named the other films as runners-up rather than as nominees. Honestly, Total Recall’s effects still look very good, and even the dated elements, such as the animatronics that are supposed to replicate heads and bodies of many of the characters, look good.

People probably remember Total Recall as an “Arnold Schwarzenegger movie,” and, in a way, it is. His film persona dominates the narrative and the action, and even 22 years later, his performance here reveals why, for a period, he was the biggest action movie star in the world and probably the world’s biggest movie star for most of that time.

Total Recall, however, is more than just Schwarzenegger. There are a number of good supporting performances, especially Michael Champion as Richter’s acerbic right-hand man, Helm. Also, Rachel Ticotin as Melina is one of the few actresses to play a partner to one of Schwarzenegger’s characters and not disappear in the shadow that Arnold’s personality and presence cast.

When I first saw Total Recall 22 years ago, I was lukewarm about it. I seem to remember that Meryl Streep was publicly critical of it. I think that I am more open-minded about movies now, and I have also learned not to view every film in a strictly literal manner. Perhaps, that is why I now think Total Recall is a science fiction movie classic, even if I didn’t think that two decades ago.