Review: "Half Baked" is All Good (Happy B'day, Dave Chappelle) 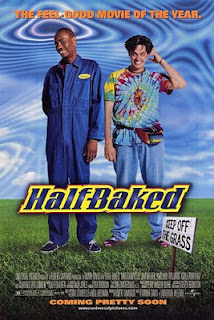 Before Dave Chappelle and Neal Brennan created the popular “Chappelle’s Show” for the Comedy Central cable network in 2003, the duo collaborated on the script for the hilarious pro-marijuana comedy, Half Baked. Although it appeared a good four years before the Chappelle Show likely began production, the film was an introduction to some of the kind of humor that Dave and Neal would feature on the show.

Dave is Thurgood Jenkins, a pot smoker since he was 15-years old. He lives with his three friends Scarface (Guillermo Díaz), Brian (Jim Breuer), and Kenny Davis (Harland Williams), with whom he was introduced to weed, in a ratty apartment in which the boys spend their non-working hours puffin.’ However, when Kenny is arrested for (accidentally) killing a police officer (a diabetic horse he overstuffed with junk food), the trio has to find a way to raise Kenny’s enormous bail so that the can get out of prison before someone invades the sanctity of his virgin butthole, i.e. save him from the trauma of homosexual rape.

Thurgood comes across a scheme to sell high-quality cannabis he steals from a pharmaceutical research lab, and he, Scarface, and Brian do quite well in their little enterprise. However, they earn the ire of Samson Simpson (Clarence Williams III), a drug dealer who wants a cut of their take. Thurgood must also keep his bud-selling enterprise a secret from his new girl friend, Mary Jane Potman (Rachel True), a young woman who hates drug dealers because her father was one and is currently in prison. Can Thurgood keep his new sweetie off the trail of smoke, and can he and his buddies save Kenny’s ass?

Half Baked is simply flat out funny. I liked everyone in the sometimes droll and often vulgar laid back comedy. In fact, Chappelle actually does not steal the show from his cast, especially the hilarious and talented trio of Díaz, Breuer, and Williams. Clarence Williams also shines in a very small part, one of the few times his versatile comedy skit talent comes to life on screen.

Half Baked also features several amusing cameos, but even without them, this movie is… dope and doped up. The film deserves its “R” rating, as it’s actually a “hard” R because of the frequent drug references and a prison shower scene featuring several fully nude men and the threat of prison rape. Still, that should not dissuade mature audiences looking for grown up juvenile comedy, and it might actually attract some folks.