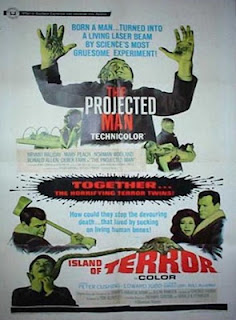 The subject of this movie review is Island of Terror, a 1966 British horror film starring Peter Cushing. The film was made and released by Planet Film Productions, but in the U.S., Universal Studios released Island of Terror as a double feature with a 1967 film called The Projected Man. Island of Terror is kind of silly, but being as I am a big fan of the famed British actor, the late Peter Cushing, I found enjoyment in it.

In the manor of a posh English estate on a small island, a group of scientists are engaged in some cancer research that is about to result in live saving cures. However, the research suddenly goes wildly wrong and creates a group of creeping, tentacled blobs. The blobs devour human and animal bone matter and self-divide after each meal. They threaten to overrun the island when Dr. Brian Stanley (Peter Cushing), Dr. David West (Edward Judd), and Dr. Reginald Landers (Eddie Byrne) arrive coincidentally in time to try to save the day. Dr. West’s girlfriend, Toni Merrill (Carole Gray), tags along to swoon and scream whenever the creatures are near.

The real treat in Island of Terror is the wonderful Peter Cushing. I’ll watch anything in which he stars, even something as poor as this. It’s sad, but funny sci-fi horror, and it does have some spooky moments and some rare seconds of suspense and fear. Otherwise, it’s forgettable. Cushing, however, is a trooper, always giving A list work no matter how goofy the material is, and here he makes no exception in giving a good performance. His Dr. Stanley is stoic, calm, scientific and brave even in the face of ridiculous monsters and in light of loosing his left hand at one point in the movie.

Eddie Judd is hilarious as Dr West, the young stud who demands the cooperation of the townsfolk. He uses a firm hand in dealing with his screaming Mimi of a girlfriend Toni. They are definitely a movie couple from another era. Today, Toni would not be so obvious in her histrionics, nor would Dr. West treat her more like a petulant child than an equal in a relationship.

It’s also nice to see such well dressed movie heroes, with jackets and ties nonetheless, and always looking neat and professional enough to walk right into a board meeting moments after fighting off monster-death with only an ax and their British wits.

Quaint and silly, see this one to get another look at the amazing Mr. Cushing, a distinct film star and personality even in this oddly charming banal film.