Remembering Groucho Marx: At the Circus 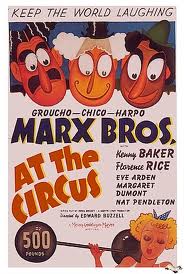 The subject of this movie review is At the Circus, which is also known as The Marx Brothers at the Circus. This 1939 Marx Brothers comedy finds the brothers trying to save a small circus from bankruptcy.

In 1939 the writer/director team of Irving Breecher and Edward Buzzell made two films starring the Marx Brothers, Go West and the comedy/musical At the Circus. By the time of At the Circus, the brothers’ act was already down to the familiar trio of Groucho, Chico, and Harpo, and At the Circus displays a full range of the brothers’ talents as singers, musicians, actors, and comedians.

Jeff Wilson (Kenny Baker) owns a small circus, but he owes his sleazy partner, John Carter (James Burke), $10,000. When Carter calls in the loan, Wilson gets the money much to Carter’s chagrin, so Carter has the circus strongman (Nat Pendleton) and a midget (Barnett Parker) attack Wilson and steal the money. Two carnies (circus employees), Antonio Pirelli (Chico Marx) and Punchy (Harpo Marx), decide to help their boss Jeff, whom they admire, recover the dough. They call in a disingenuous lawyer, J. Cheever Loophole (Groucho Marx), to lead the investigation into the disappearance of the money. But when the money proves difficult to recover, Loophole cooks up a hair-brained scheme to get the dough from Jeff’s wealthy aunt, Mrs. Susan Dukesbury (Margaret Dumont), from whom Jeff is estranged.

While this isn’t the Marx Brothers’ best film, it is a very entertaining and funny comedy with some sparkling musical numbers. The best musical bit features Harpo with a crowd of African-American co-performers that finishes with Harpo on harp while the black folks stand around and grin, gawk, and stare wide-eyed. Groucho, however, shines in this film; he’s at his wittiest and most sarcastic. He carries the film with rapid fire, smart aleck conversation, and while it’s hard to pick his best moment in this film, it could be his innuendo-filled duel with Eva Arden’s Peerless Pauline. Excellent production values top off this breezy comedy, which I heartily recommend.

I remember this as the first Marx Brothers movie I ever saw. I loved At the Circus the first time I saw it, and it still has a special place in my heart. So consider that when reading my review.

Posted by Leroy Douresseaux at 3:09 PM