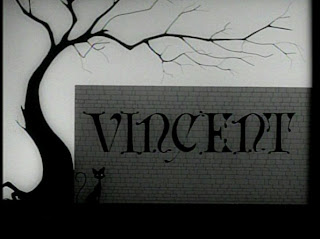 SHORT/ANIMATION/FANTASY with elements of comedy and horror

Vincent is a black and white, stop-motion animation film short from director Tim Burton and Walt Disney Productions. The short film is essentially Burton’s directorial debut – basically his first professional film. Vincent is included on both the Special Edition and Collector’s Edition DVDs of Nightmare Before Christmas.

Narrated by Vincent Price, the film tells the story of Vincent Malloy, a seven year-old boy fascinated (or obsessed) with Vincent Price. He constantly daydreams, imagining horrific events he wishes would occur in his life: having a dead wife that calls to him from her grave, boiling his aunt in wax, and turning his dog into a zombie, among other things. Soon, his imagination gets the best of him, and he looses himself in his macabre daydreams, and it annoys his Mother that he doesn’t know where reality begins and the horror ends.

Next to La Jatee, this is best short film I’ve ever seen. Both brilliant and biographic, it hints at many of the visual elements and themes that Burton would use in his most personal and signature films: Beetlejuice, Nightmare Before Christmas, and Corpse Bride, in particular. Filmed in a shadowy black and white photography, the film’s design (by Burton) is as imaginative and as vivid as most color animated films; in fact, he uses black and white as the color of the film. Price’s narration is a subtle mixture of Dr. Seuss, Edgar Allen Poe, and oral folk storytelling. Not only does Vincent Malloy resemble Tim Burton, but also the film is obviously a quasi-biography and film essay on Burton’s own passion for Vincent Price, for the macabre, and for Gothic-inspired cartoons and illustrations.


Posted by Leroy Douresseaux at 11:44 AM