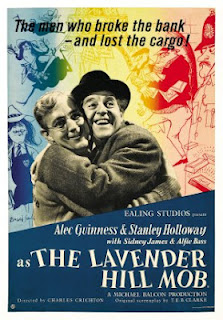 The subject of this movie review is The Lavender Hill Mob, a 1951 British crime comedy. Directed by Charles Crichton, the film stars Sir Alec Guinness and Stanley Holloway in a story about a plot to steal gold bullion.

Henry Holland (Alec Guinness) is a dedicated bank clerk, and he regularly sees to the delivery of gold bullion to the bank where he works. But he wants more out of life. One day he happens upon an idea to get the gold for himself and brings in a small group of accomplices with him to pull off a robbery. Henry plots the theft of one million pounds of gold, and suddenly the meek Henry becomes “Dutch,” the leader of The Lavender Hill Mob. The heist is successful, but the best laid plans of mice and men. Slowly, the intricate plan begins to fall away by pieces, and just maybe the law is on to Dutch and the Lavender Hill Mob.

Many film fans consider The Lavender Hill Mob to be one of the three great Ealing Studios comedies. Studio writer T.E.B. Clarke won an Oscar® for this film’s screenplay, which it is clever and occasionally witty, but mostly dry. Director Charles Crichton has his moments – most of them in the last second half of the film: the Eiffel Tower descent, Henry and Pendlebury (Stanley Holloway) attempting to buy a cruise ship ticket, and the police car chase are among some of the best moments.

But the true star is Alec Guinness. By turns clever and subtle and droll and menacing, the film revolves around him, and he sells the entire thing. The film is not a great feat in directing or writing, but it is about a great actor who can so become a character that the audience buys into the character. Henry Holland is an interesting and intriguing fellow, and you may want to watch his every move. Sir Alec seems totally confident in what he’s doing before the camera. He’s the focal point, and the audience lives and dies with him, viewing the story entirely from Henry’s point of view. Many actors get us to buy into their characters because of the actors’ star power. Sir Alec did it by creating a character we want to know and through whom we want to live vicariously – a great performance that makes The Lavender Hill Mob memorable.