Noomi Rapace a Dragon in "The Girl with the Dragon Tattoo" 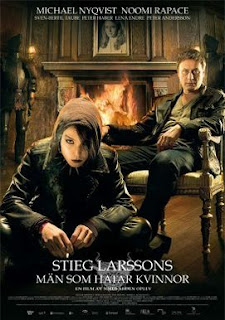 Män som hatar kvinnor is a 2009 Swedish drama and mystery thriller. The title literally means “Men who hate women.” This film is based on the 2005 novel, Män som hatar kvinnor, written by the late author and journalist, Stieg Larsson. In English-language markets, the novel and its Swedish film adaptation are known as The Girl with the Dragon Tattoo. The film focuses on a disgraced journalist and a young female hacker who try to discover the circumstances behind the disappearance of an apparently murdered young woman.

The film opens in December 2002. Mikael Blomkvist (Michael Nyqvist), publisher of Millennium magazine, loses a libel case, which gets him a huge fine and a three-month prison sentence. Meanwhile, Lisbeth Salander (Noomi Rapace), a young computer hacker who works as a surveillance agent, has been watching Blomkvist and researching his activities. Lisbeth delivers a comprehensive report on him to Dirch Frode (Ingvar Hirdwall). Frode convinces Blomkvist to meet his client, 82-year-old Henrik Vanger (Sven-Bertil Taube).

Vanger hires Blomkvist to investigate the disappearance of Harriet Vanger, his niece who disappeared in 1966 and is believed to be dead. Vanger believes that Harriet was likely harmed by one of his family members, who are all part of the Vanger Group. Blomkvist’s investigation is going nowhere when Lisbeth intervenes and agrees to help him with the case. As they dig deeper into the Vangers, Blomkvist and Lisbeth discover dark family secrets that go back decades.

I rented a copy of The Girl with the Dragon Tattoo from Netflix. I intended to watch the first half-hour of the film and then stop and watch the rest of it at a later time. Those plans were crashed. I could not stop watching this tremendously gripping thriller. Everything works. The direction is tight, and that results in a tautly-paced film in which the characters’ lives are always perilously close to going over the edge.

The screenplay is well-written, but the writers are enamored with Lisbeth, while too much about Blomkvist is left out. As the film progresses, Blomkvist becomes just an investigator – the P.I., the classic whodunit detective, the gumshoe, etc. The script even relegates the Vanger Family to the background and sidelines of the story, although the resolution is firmly nestled in the family’s extra-dark past and present.

However, it is easy to see why the script is in love with Lisbeth Salander, the girl with the dragon tattoo. She lights up the story, and Noomi Rapace’s luminous performance brings Lisbeth to brilliant life. As Lisbeth, Rapace radiates unusual beauty, raw sexual power, exceptional strength, uncommon intelligence, and fierce independence. She’s a goddess!

Posted by Leroy Douresseaux at 2:21 PM