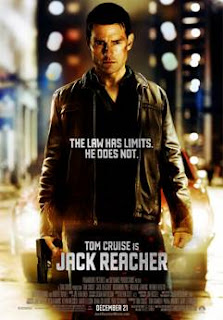 Jack Reacher is a 2012 drama and thriller film from writer-director Christopher McQuarrie. The film stars Tom Cruise as Jack Reacher, a fictional character that originally appears in a series of novels by author Lee Child (the pen name British author Jim Grant). Jack Reacher the movie is based on the ninth Jack Reacher novel, One Shot (2005). The film follows Reacher as he investigates the case of a military sniper charged in a mass shooting.

Not long afterwards, Jack Reacher (Tom Cruise), a former U.S. Army Military Police Corps officer (a “military cop”), arrives in Pittsburgh, but Rodin and Emerson will not let him see the evidence against Barr. Reacher meets with Helen Rodin (Rosamund Pike), Barr’s attorney and the District Attorney’s daughter. Reacher reluctantly agrees to help Helen, and soon finds himself drawn into a dangerous cat-and-mouse game with unknown forces that do not want the case against Barr investigated.

Everyone is a supporting actor and character to Tom Cruise in Jack Reacher, but some make the most of their time. Standouts include David Oyelowo as the dour and menacing Detective Emerson, Jai Courtney as the vicious killer named Charlie, and the always-welcomed Robert Duvall. As the retired Marine and gun range owner, Martin Cash, Duvall brings some much-needed levity and humor to the film. Cash throws Reacher off his game a bit, which makes Reacher vulnerable and more interesting as a character in the movie’s final half-hour or so. That makes it seem as if Reacher really could be killed, in turn, heightening the sense danger.

Jack Reacher is a perfect role for Tom Cruise. Cruise’s obvious aloofness and brusque charm, as well as that innate cold-bloodedness (which he tries to hide), are a near-perfect fit for Jack Reacher. Cruise as Reacher is just fun to watch, and I found that not knowing what crazy, unexpected thing he was going to do or say made Cruise/Reacher fascinating, even enthralling.

I’m surprised that this movie was not a bigger hit than it was. Outside of the Mission: Impossible films, this is one of the better Tom Cruise movies. Jack Reacher shows why Cruise is a true movie star and a rather good actor to boot.

Posted by Leroy Douresseaux at 6:02 AM