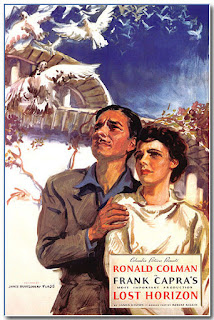 The subject of this movie review is Lost Horizon, a 1937 adventure film and fantasy drama from producer-director, Frank Capra. The film is based on the 1933 novel, Lost Horizon, by author James Hilton. While writer Robert Riskin is credited as the film’s sole screenwriter, Sidney Buchman contributed to the screenplay, apparently when portions of the film were re-shot. The movie follows a group of plane crash survivors who visit a secluded land that may or may not be miraculous utopia.

Over the years, the original film was edited for time. Eventually, the last surviving print of the original version was damaged beyond recovery. The subject of this review is a restored version of the film that is slightly over two hours in length. This restoration was initiated by the American Film Institute (AFI) in 1973, and I first saw that version on Turner Classic Movies in 2003. In this restored version, the original audio track is intact, and still photographs of the actors and of specific scenes replace the missing film footage.

In the film, a plane containing the British diplomat Robert Conway (Ronald Colman) and his brother George (John Howard) is hijacked and crashes in the Himalayas. The mysterious inhabitants of the Eden-like Shangri-La rescue the survivors, and take them into the utopian city, which is located in a valley protected by the vast Himalayan mountains. While the world grows tense with the conflicts that would birth World War II, Conway begins to learn that he belongs in Shangri-La and has a purpose there, but will the problems he and his fellow travelers brought with them from the outside world cause strife in the utopian setting.

One of the films that really took advantage of the stylish beauty of art deco was Frank Capra’s film, Lost Horizon. Although the movie is quite good, the work of art director Stephen Goossson and set decorator Babs Johnstone stand out and give this film the atmosphere of beauty, perfection, and mystery that the story required. In fact, Dimitri Tiomkin’s score serves to accentuate the flavor of the film’s set as well as establish the mood for the story.

Lost Horizon is a very entertaining film. Filmed in black and white, the film has a surreal, dreamlike quality that actually made Shangri-La seem like a possibility, as if it really existed. The film, so lovingly put together, made me pay attention to the story, following the story of the survivors as they struggle to understand a place like no other. In simple terms, Lost Horizon makes a strong case not only for a haven from our real world problems, but to imagine a place where people live together in harmony with themselves and with their environment. However, the film is not naïve. The nagging troubles of the outer world are always at Shangri-La’s door. Also, the characters have lived long enough in the outside world to see through the gauze of Shangri-La; they have to accept this place on their own terms and at their own times.

Lost Horizon isn’t necessarily propaganda so much as it is a clever fantasy adventure that looks really good, entertains with a solid story, and makes us want for something, if not perfect, as close to it as we can live with. To fully understand the concept and ideas behind this film; words alone won’t do it. You have to watch Lost Horizon, and it’s certainly worth watching.

Posted by Leroy Douresseaux at 12:42 PM