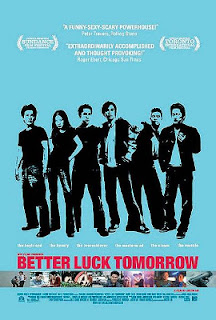 The script for Justin Lin’s film Better Luck Tomorrow attracted hip hop entertainer and current minister MC Hammer as a financial backer, and the finished film attracted MTV as a film distributor. Better Luck Tomorrow is the tale of over-achieving, but disenchanted Asian-American teens from middle class, upper middle class, and affluent backgrounds, and since early in the year, it’s gotten a lot of buzz as a cool indie flick. Predictably, however, the young male characters’ world-weariness leads to extreme violence, and isn’t that just so typical of indie films about young men.

Ben Manibag (Parry Shen) is an intelligent, bright boy with his eyes on getting into a really good college where he can study biology and perhaps later go to medical school. He’s so clean cut that he even does charity work at a hospital and heads a volunteer public clean up crew. He and his social group of upwardly mobile Asian-American teens have vague feelings of dissatisfaction. He and his buddies put their overachieving minds to the business of various criminal enterprises. They enjoy the power trip and attention their crimes bring as much if not more so than the cash they earn, but their immoral behavior soon has them stumbling into a plot that has deadly consequences.

As both editor and director, Justin Lin ably adds many filmmaking flourishes that keep his film riveting, kinetic, and mostly fun to watch. The script by Lin and his collaborators, however, isn’t very strong. The characters are cardboard cutouts, and they’re not helped by the actors’ lack of subtlety. The performers seem to have two settings – bored and (a few times) intense. Jason J. Tobin as Virgil Hu is the only actor who seems to get any mileage out of his character.

There is one thing that makes the film a bit of an oddity. It’s about Asian-Americans, and not (thankfully) about bored, spoiled rich white kids and the (tedious) dark underbelly of suburbia. A film about bored youths is almost always about young, white people. It’s as if young nonwhites don’t have lives, or at least don’t have interesting lives in this so called melting pot.

That novelty is actually not a bad thing. It actually makes the film more interesting and adds a lot to the visual flavor. It’s nice to see a film examine something from a new and different point of view. Lin deserves major credit for his willingness to bring this movie, Better Luck Tomorrow, to screen. Reservations aside, he looks, judging by the film, like he could be a very good director. Hopefully, he and his writing collaborators will also get better.