Review: "Torque" is Fast, but Not Furious (or even good) 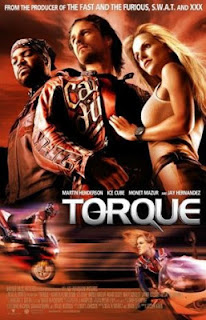 The subject of this movie review is Torque, a 2004 action movie from director Joseph Kahn. I think of this film as The Fast and the Furious on motorcycles; in fact, one of Torque’s producers, Neal H. Moritz, also produces The Fast and the Furious film franchise. Torque focuses on a motorcyclist who is first framed for murder by an old rival and then, pursued by the murder victim’s brother, the leader of a feared biker gang.

Biker Cary Ford (Martin Henderson) returns to Cali, after spending several months overseas. Not long after Cary returns, an old rival named Henry James (Matt Schulze) frames him for a murder Henry committed. However, Junior (Fredro Starr), the murder victim, is the brother of Trey (Ice Cube), a gang leader who buys the trumped up evidence that Cary killed Junior, and he wants Cary dead. Tie that into the fact that an FBI agent wants to arrest Cary as a drug dealer, and the film Torque has its conflict ducks lined in a row.

Twenty years ago, the Warner Bros. logo would not have appeared at the head of this film; instead the movie company logo that would have appeared in front of a film like Torque would have belonged to such outfits as Cannon Pictures or New World Pictures. I understand and whole-heartedly buy into the concept of popcorn pictures, but Torque is plain bad: bad directing, worse writing, piss poor dialogue, and charisma-less actors. Torque has the power to summon cringes galore, and it is unintentionally funny – not rare in Hollywood pictures, but painful when you’ve already lowered your expectations and are willing to accept even a mediocre movie if it’s mildly entertaining. Torque is not anywhere entertaining.

The last ten minutes, however, are a hoot, and the scene I call “joust of the bitches” is worth the cost of a discounted rental. “Star” Martin Henderson is the lowest of the low-rent Tom Cruise-look-alikes, but no one else in this film is better. Think thrice before you rent this dog.

Posted by Leroy Douresseaux at 7:02 AM