Review: Scooby-Doo! Legend of the Phantosaur 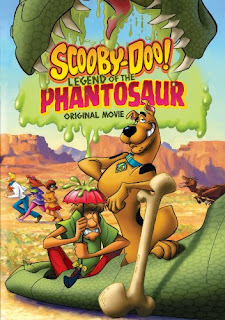 Beginning in 1998 with Scooby-Doo on Zombie Island, Warner Bros. has released direct-to-video animated movies based on the Scooby-Doo cartoon franchise. Except for a few years when two movies have been released, there has been at least one movie a year. Scooby-Doo! Legend of the Phantosaur is the 16th movie in this direct-to-video series.

Legend of the Phantosaur begins with a successful conclusion to another mystery – well, not entirely successful. The case has left Shaggy Rogers (Matthew Lillard) with a case of “acute threat avoidance hypertrophy disorder” or “overreaction to fear stimuli.” Also, Fred Jones (Frank Welker) is failing science, so Daphne Blake (Grey DeLisle) comes up with an idea to help both Fred and Shaggy. They will travel to the remote desert town of La Serena, the location of a spa where Shaggy can relax. He can also avoid scary things because La Serena is “the least haunted town in America” (according to the U.S. Bureau of Supernatural Forces). Near La Serena, there is also an archeological dig, which would make a good extra-curricular project for Fred.

The gang arrives at the La Serena Spa and meets its eccentric owner, Mr. Hubley (Fred Willard). Hubley wants to use his own invention, an advanced hypnosis machine with a giant holographic projector, to cure Shaggy. Later, Professor Svankmajor (Finola Hughes), the head of the local paleontological dig, shows the gang the dig site. Velma Dinkley (Mindy Cohn) meets one of Svankmajor’s students, Windsor (Matthew Gray Gubler), who is like an identical male version of Velma, and the two begin a romance.

It turns out that La Serena is indeed experiencing a haunting. The Phantosaur, a local Native American legend, has returned to terrorize the area. The latest mystery the Scooby Gang tackles is like no other. Shaggy has a dual personality, and Scooby-Doo (Fred Welker) is trying to manage them both. There is a local biker gang, and Shaggy challenges their leader, Big Texas or “Tex” (Kevin Michael Richardson), to a motorcycle race. And there are snakes and more dinosaurs waiting in the wings to terrorize. Can the gang solve this mystery when they may not even survive it?

Scooby-Doo! Legend of the Phantosaur is 75 minutes in length, but it seems much longer than that, but not in a bad way. There are so many subplots, character arcs, and lines of conflict that this seems like a live-action film of about 100 minutes in length. This is also something different from other Scooby-Doo straight-to-video films; it is more character driven, and the comedy is built around character situations.

Potential viewers shouldn’t be put off because there are some big action set pieces here – a motorcycle race, a dinosaur invasion of La Serena, and the entirety of the last act. Still, in between the manic fun, there are quite a lot of off-rhythm character drama scenes (if I can call them that). This focus on the characters does bring up a problem; the voice performances for what are essentially supporting/guest characters aren’t that good. Matthew Gray Gubler’s performance as Windsor seems uninspired, and Fred Willard is either awkward or out of place as Mr. Hubley.