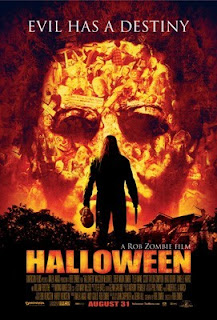 In 2007, musician turned movie director Rob Zombie already had two brutal horror films to his credit, House of 1000 Corpses and its sequel, The Devil Rejects, when he unleashed Halloween, a remake and re-imagining of director John Carpenter’s 1978 classic horror film of the same name. Zombie’s film followed the now familiar storyline, but went into the past to reveal some origins.

It’s Halloween, and 10-year-old Michael Myers (Daeg Faerch) goes on a murderous rampage in the quiet town of Haddonfield, Illinois. He spends the next 17 years in the Smith’s Grove Sanitarium under the care of noted child behaviorist, Dr. Samuel Loomis (Malcolm McDowell). Loomis seems to be the only person who can truly understand the evil of Michael’s nature.

After 17 years, the adult Michael Myers (Tyler Mane) escapes from the mental facility on the day of Halloween and begins a bloody trek back to Haddonfield. He stalks a high school girl, Laurie Strode (Scout Taylor-Compton), and her friends, Annie (Danielle Harris) and Lynda (Kristina Klebe). When Dr. Loomis hears about Michael’s escape, he races to Haddonfield and joins Sheriff Brackett (Brad Dourif) to find Michael and to put an end to Michael’s reign of terror. There, Loomis discovers that Myers and Laurie Strode have ties to a similar past.

Rob Zombie’s Halloween is a prequel, a re-imagining, a reinvention, and a remake of the original film. This new film is partly a prequel because Zombie, as both writer and director, chose to begin the story earlier in Michael Myer’s life than the writers of the original movie, John Carpenter and the late Debra Hill, did. That the story begins before the scene in which Michael puts on the mask and kills his sister, which is where the first film began. Zombie’s film begins Halloween morning, at the breakfast table of a highly dysfunctional “white trash” family. The audience sees Myers the “perfect storm” as Dr. Loomis calls it: Myers’ destructive home environment and his murderous tendencies.

Zombie re-imagines the film in the way he presents Michael Myers. Michael is not something of supernatural force, as the first film suggest, but he is simply a human monster – a psychopath. In the original film and its sequels (in which John Carpenter was involved to some extent) Carpenter suggested that Michael Myer’s evil was in some way a reflection of the darkness that existed at the heart of small towns like Haddonfield. Zombie provides no such social context or metaphor. Myers is simply a bad-ass, evil killer dude.

The film is a re-invention of sorts because it presents the violent slasher film as sort of a reality show in which all the gushing fluids of violent murder must be on display before the voyeuristic audience. In the original Halloween, Carpenter showed no blood, although Myers’ attacks on his victims were quite violent. In Zombie’s hands, the attacks are rude and crude – exercises in blood and mayhem and in bloody mayhem.

This film remains a respectful remake. Scenes, sequences, and even certain shots are repeated from the original or are only slightly altered. Halloween 2007 can stand on its own. The acting wasn’t great, but Zombie chose a nice mixture of character actors for the major parts and some famous faces and somewhat cult figures to fill in the bit parts and cameos, and that works out well.

Towards the end, the film seems out of control, both in terms of Zombie’s usual excesses and the fact that the ending seems padded. Still, Halloween is a scary movie, a celebration of raw violent horror, and true to Zombie’s rebel spirit. It is scandalous and disrespectful of those “our values” about which so-called conservatives like to preach. It’s funny and scary – a black comedy and horror movie that is stained dark with a lot of blood.