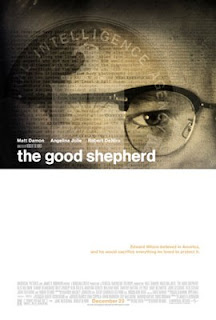 The Good Shepherd is the first film Robert De Niro has directed since 1993’s A Bronx Tale, which was his directorial debut. The film, which is partially fact-based, examines the early history of the CIA.

It’s 1939, and Edward Wilson (Matt Damon) is a sharp-minded Yale student and patriotic American. His keen sense of discretion, the value he places on secrecy, and his commitment to honor earns him the attention of Yale’s infamous secret society, Skull and Bones. His acute mind gets him recruited to the Office of Strategic Services (OSS), the precursor to the CIA, and he serves his country during World War II. After the war, he becomes one of the founders of the CIA, and his decision to play a part alters his life even as he helps to shape the most powerful covert agency in the world.

Wilson is loyal to his country, but he begins to feel the job eroding his ideals and filling him with distrust because, as he’s so often told, he can’t really trust anyone. Meanwhile, his stoic personality and reticence about saying much shuts his wife, Margaret (Angelina Jolie) out of his life and starves their marriage. Wilson’s steely dedication also doesn’t do much for his relationship with his son, Edward Jr. (Eddie Redmayne), who wants to follow his father into the murky world of the CIA.

De Niro certainly demands your full attention with The Good Shepherd, and he gives the viewer so much to mull over. The problem with this film is that it is an epic PBS, Masterpiece Theatre-like, mini-series squeezed into a quarter hour short of three hours. De Niro’s narrative, like the script by Eric Roth, lumbers through domestic and international intrigue with an occasional stop at Edward Wilson’s way-unhappy home, yet neither Wilson’s covert work nor his home life get the fair treatment they need.

In Roth’s script, characters come and go like ghosts, and a quarter century of history darts by as we go back and forth in time. Nothing really sticks, and if it weren’t for some memorable moments (the brutal murder of a gay British spy and the senses-shattering end of another spy via a plane), The Good Shepherd would be an entirely cool exercise. The acting is fair to good, but Edward Wilson is too stiff and unemotional, and Matt Damon, who is best when he’s animated, a man of action with a plan, plays Wilson as a robot.