New "Footloose" Both Respectful and Down-and-Dirty 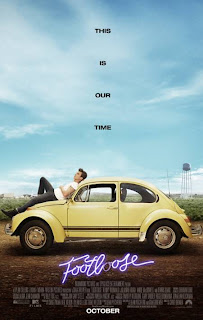 DRAMA/MUSIC with elements of romance

Footloose is a 2011 drama and dance film from director Craig Brewer (Hustle & Flow). It is also a remake of the 1984 teen drama, also entitled Footloose. The new Footloose is surprisingly faithful to the first, so much so that it can be unsettling at times. The new film updates the story, changes some scenes, and repurposes some characters. Footloose 2011 is also edgier, hotter, and dirtier – in a Southern sort of way.

As before, Footloose focuses on Ren MacCormack (Kenny Wormald), a teenager who arrives in the small town of Bomont (Georgia?). Ren’s mother recently died, so Ren has come to live with his Uncle Wes Warnicker (Ray McKinnon), Aunt Lulu (Kim Dickens), and their two daughters. Although he is the new kid, Ren doesn’t have trouble fitting in and soon befriends two football players, the cowboy Willard (Miles Teller) and the jovial Woody (Ser’Darius Blain), and Willard’s girlfriend, Rusty (Ziah Colon). His most startling new friend is the wild child, Ariel Moore (Julianne Hough), the daughter of local pastor, Reverend Shaw Moore (Dennis Quaid), and his wife, Vi (Andie MacDowell).

Ren likes to dance and play loud music, but he soon learns that loud music and dancing, for the most part, are not allowed in Bomont by several different city ordinances. Ren decides that the senior class should have a prom and starts a petition to change the law. His decision not only pits him against the city council, but especially against Rev. Moore.

Footloose 2011 is so faithful to the original that it retains many well-known scenes from the original – including Ren’s dance of anger at the mill, the out-of-town trip to the club (where Willard gets punched), and a re-imagined version of the “chicken race.” Some of the original songs return, including “Footloose,” in the original Kenny Loggins version and in an up-tempo country version by Blake Shelton.

Most importantly, the new Footloose is simply a very good movie. I had a darn good time watching it, and I would watch it again. It has a killer opening to Kenny Loggins’ pounding “Footloose” that also sets the stage for this film’s darker tone. This time, director/co-writer Craig Brewer and co-writer Dean Pitchford (who wrote the original film and co-wrote its songs) delve deeper in the psychology of the characters. The audience will get a more intimate look into why Ariel is so wild and why her father has control issues, both with his family and with the town at large.

The heart of the film is still Ren MacCormack, the rebellious teen with the dark glasses, black jacket (and black pants), and skinny tie. Kenny Wormald plays him to near perfection with a James Dean-like swagger and intensity. Movies need a star, Footloose has one in Wormald.

The original film had synthesizer-driven pop music as its structural backbone, and while music is important in the new film, Brewer relies on character drama and the distinctive setting, the backwoods Bomont, to drive the story. Brewer, who is known for earthy films featuring lots of Southern black folk, takes the original all-white, Midwestern Bomont of the original film and populates the new Bomont with lots of African-Americans, rednecks, good-old boys, and good Southern people. It’s the Deep South side by side with the Dirty South.

The dance moves performed by the young actors is heavily influenced by country music (line dancing), hip hop, and krumping. When Brewer isn’t making his cast mesmerize you with suggestive, booty-poppin, hip-thrustin’ dance moves, he is dragging you into the drama. With the new Footloose, Brewer does right by the original and still manages to make his own unique film – the best teen dance movie in years. It’s not perfect, but it’s perfect for me.