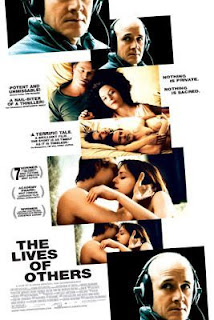 Das Leben der Andersen or The Lives of Others is a nuanced human drama that portrays life in the GDR – the German Democratic Republic – or as it was better known, East Germany, during the mid-1980’s. The film won the 2007 Oscar for Best Foreign Language Film of the Year (as a representative of Germany), and this riveting indictment of life under state-sponsored altruism ultimately shows that humans have the ability to do the right thing even after doing the wrong thing so long.

The film opens five years before Glasnost and the ultimate fall of the Berlin Wall. East Germans live under the watchful eye of the Stasi, the state police (security). Two Stasi officers, Captain Gerd Weisler (Ulrich Mühe) and his superior and longtime friend, Lt. Col. Anton Grubitz (Ulrich Tukur) attend the premiere of the new stage play from the famous playwright, Georg Dreyman (Sebastian Koch). There, the two men meet the head of the Ministry for State Security, Minister Bruno Hempf (Thomas Thieme), who promptly informs Weisler and Grubitz that he does not trust Dreyman to be loyal to the SED – East Germany’s ruling Socialist Union Party – and suggests putting Dreyman under surveillance.

Eager to boost his own political career, Grubitz entrusts the surveillance to Weisler, who promises to personally oversee the operation. While Dreyman and his live-in girlfriend, actress Christa-Marie Sieland (Martina Gedeck), are away from their apartment, Weisler has the apartment systematically bugged. After a friend kills himself, Dreyman begins to secretly research and write about the GDR’s high suicide rates, which the government wishes to keep secret. This piques Weisler’s interest as something to watch. However, when he discovers the real reason for Hempf’s interest in Dreyman, Weisler becomes disillusioned with the Stasi’s goal to know everything about “the lives of others,” but what can one man do about it?

That this is Florian Henckel von Donnersmarck’s first feature-length film is difficult to believe. He makes it look easy to recreate a frightening time and place that rings with so much truth and authenticity. With such grace and subtlety, he indicts a system that uses the fear of imprisonment or death at every turn to keep the populace in line. Almost as bad as imprisonment is to have the government deny an individual the ability to practice his profession, as is tragically depicted in the matter of one of Georg Dreyman’s friends. The viewer can feel the soul-draining and spirit-killing oppression, or even worse, feel the desperation with which some are willing to sacrifice what little freedom and choice they have to serve the state. Donnersmarck rightly exposes how “for the good of state” and “for the security, safety, and well-being of everyone” not only robs the individual of his individuality, but also steals the right of all people of their right to freedom of expression. Ultimately, it leads to a spiritual death and perhaps, also a physical death.

The performances are great, in particularly Ulrich Mühe, whose Capt. Weisler is the center point of this narrative. Mühe skillfully sells Weisler’s jealous and blind zeal, and then takes us on Weisler’s journey of redemption in a manner that seems authentic. Martina Gedeck and Sebastian Koch as the high profile couple are fantastic in creating a full-fleshed out, three-dimensional and believable couple that loves and fights and then, makes up and expresses a deep love that goes beyond the physical into the spiritual.

For its triumphant portrayal of life and survival under monstrous oppression and state control, The Lives of Others is one of the five best films of 2007.