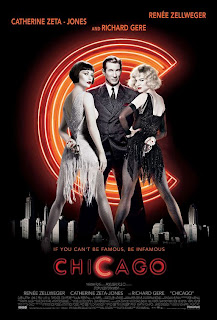 MUSICAL/CRIME/DRAMA with elements of comedy

Adulterous Roxie Hart (Renee Zellweger) kills her lover after he boldly admits lying to her and stringing her along. Velma Kelly (Catherine Zeta-Jones) kills her song and dance partner sister and her own husband when she catches them knocking boots. Both end up in the same dark and dank prison awaiting trial, clients of William “Billy” Flynn (Richard Gere), a flamboyant lawyer who specializes in representing gals who’ve killed their husbands and lovers. Under the tutelage of Matron “Mama” Morton (Queen Latifah), the girls struggle to escape the gallows for their crimes and strive for fame in scandal laden 1920’s Chicago.

Yes, it’s good, damn good. Director/choreographer Rob Marshall’s Chicago, a film version of the famed musical, is a thoroughly enjoyable and invigorating film spectacle. If this and Moulin Rouge! represent what the return of film musicals will look like, we are in for a treat. Marshall choreographed “Annie” and “Rodger and Hammerstein’s Cinderella” for television. In his film, he creates lavish and electrical dance scenes of the musical’s songs and integrates them with the dark and gritty world of 20’s Chicago. The colorful staged renditions of the songs flit back and forth showing us the idealized worlds of the characters, juxtaposed against the brutal frankness of their real world. The dance numbers are stirring and attention grabbing, as visually attractive as anything on MTV.

Screenwriter Bill Condon, who won an Academy Award for writing his film Gods and Monsters, does an excellent job composing a story that can compete with the energy and electricity of the songs. That’s no easy feat. Condon had to structure the story so that we would be as interested in it as we were thrilled by the songs. Chicago’s central story is rife with engaging tension and conflict and with characters we can support along every step of their treacherous journey.

Can Ms. Zellweger, Ms. Zeta-Jones, and Mr. Gere sing and dance? The answer is a resounding “yes!” Seeing them in the staged numbers and in the story scenes is like watching six different performers. I had a hard time believing the actors and singer/dancers were the same people; I know these performers and to see them pull off these performances is a revelation. I didn’t know Gere had it in him. It’s simply stunning and worth every minute of your time to watch.

The supporting performances are quite nice. Queen Latifah’s presence asserts itself strongly on the film; it often seems as if Mama is the puppeteer backstage directing events. Taye Diggs adds a sense of style to the film, and John C. Reilly quietly adds a sense of innocence and moral dignity to a story of people ready to grab fame at any costs.

Chicago, like Moulin Rouge!, is not like your average film. In fact, it’s very different from most quality and “serious” films. Like a good drama, it’s thoughtful; like the best action movies, it’s quite explosive. Chicago is a dream work, a film that is as visually rambunctious as the best music videos, but with the strong story and characters that you can take to heart – a must see movie.