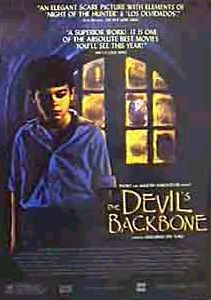 DRAMA/THRILLER with elements of mystery and fantasy

Set during the waning days of the Spanish Civil War, The Devil’s Backbone is the story of Carlos (Fernando Tielve), a 12-year-old orphan who is the latest arrival at Santa Lucia School. The School is an imposing stone building that shelters orphans of the Republican militia and Red politicians and also children left behind by their parents because of the civil war. There are, of course, dark doings at the school, involving the usual suspects of sexual intrigue, secret murder, and hidden gold. It is Santi (Junio Valverde), the ghost of that secret murder victim, who holds the key to the story’s resolution and to justice.

Directed by Guillermo del Toro, who has had movie hits in the United States with such fantasy comic book adaptations as Blade II and Hellboy, The Devil’s Backbone is in the fine tradition of Spanish and Latin American storytelling that allows for ghosts and the spirits to play an active part in real world drama. The film is an expertly crafted thriller and poignant drama that is as scary and as intense as traditional horror films and manages this while being a quiet character drama.

In a way, The Devil’s Backbone is very difficult to categorize, it could be classified as a drama, thriller, mystery, or horror film. The characters are important to the film, but the school’s haunted atmosphere (even more so than the ghost) and its aura of misery are as important. The film would clearly fit into the fantasy genre, but it is firmly grounded in characters with real world needs, feelings, desires, and thoughts. In the end, the most important thing about the film is that it is simply a good story.

Early in the movie, the adult characters seem as if they’re going to control the show, but in the end, it is the young actors who shine. And it’s not so much that one juvenile actor dominates (although individual young characters have the larger parts than others), it’s the youthful cast as a whole that makes this story work on so many levels, as everything from a crime drama to haunted campfire tale.