"Paranormal Activity 3" a Spine-Tingler for Real 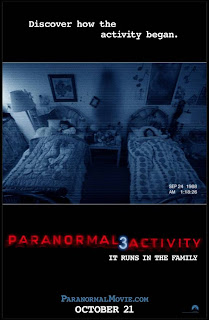 The main story opens in late summer of 1988 at the birthday party of Katie (Chloe Csengery), during which her younger sister, Kristi (Jessica Tyler Brown), can be seen in the background talking to empty space. The girls live with their mother, Julie (Lauren Bittner), and her boyfriend, Dennis (Christopher Nicholas Smith).

Dennis notices that strange things have begun to happen in the house ever since Kristi began interacting with an imaginary (or invisible) friend whose name she says is Toby. Dennis sets up cameras around the house to record these strange events. Through his investigations, Dennis discovers a strange symbol drawn on a wall in the house, which leads to an even more shocking discovery. As Dennis tries to learn more, the paranormal activity increases both in number and in intensity.

I compared the first two Paranormal Activity films to The Blair Witch Project, and the final act of this film has striking similarities to the end of the original Blair Witch film, which is a good thing in this instance. I really like Paranormal Activity 3 because it is genuinely scary. Several times, I hugged myself tightly in an anticipation of the next bump in the night or shadowy figure standing in the background. This movie delivers the chills. I was still thinking about it the morning after seeing it.

Still, it feels as if something is missing from Paranormal Activity 3. It’s as if there is a glitch in the storyline that runs through this film series and through the backstory that is the series’ spine. I won’t let that bother me. This movie is a real Halloween, scary movie thriller. Perhaps, it is because the entity seems angrier this time and because it threatens small children so much in this film. Whatever the reason, Paranormal Activity 3 is the real deal, and I’m looking forward to the next film.