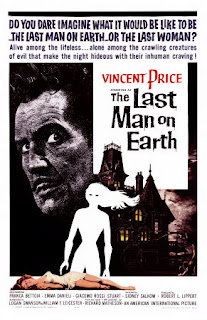 A worldwide plague (or pandemic) seemingly kills all of humanity, but it also causes the dead to arise and return as shambling, simple-minded, vampire-like creatures who want blood. Dr. Robert Morgan (Vincent Price) is apparently the only human unaffected – the last man on earth. Every night a group of these “living dead” attack Morgan’s house, calling his name, and demanding his life. What makes it worse is that one of the creatures was Morgan’s best friend, Ben Cortman (Giacomo Rossi-Stuart). Eventually, Morgan encounters a young woman named Ruth Collins (Franca Bettoia), whom Morgan at first assumes to be another surviving human. However, there is more to Ruth than meets the eye, and it may mean there are others like her – others who want Morgan dead.

The Last Man on Earth was the first film adaptation of one of the most famous vampire novels of 20th century, Richard Matheson’s I Am Legend. Stephen King claims that the book was a huge influence on him, and both Matheson’s book and this 1964 adaptation influenced George A. Romero’s seminal zombie film, Night of the Living Dead. This adaptation is a somber and occasionally creepy, if not chilling, film about loneliness and what it truly means to be “the only one.” Price ably carries the film practically by himself, as every other character only has a small part. The surreal black and white photography and the carefully designed sets give this film a forlorn mood. However, the locations, which feature abandoned cars, debris, and bodies scattered about the streets make this a depressing and haunting, but engaging apocalyptic film.