Disney's "The Fox and the Hound" Still a Joy to Watch 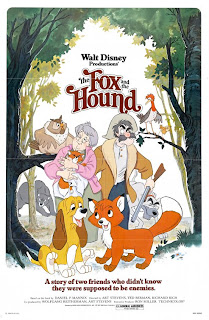 ANIMATION/FANTASY/DRAMA/FAMILY with elements of action and comedy

This year is the 30th anniversary of the original release of the Walt Disney animated feature film, The Fox and the Hound (specifically July 10, 1981). It was re-released in 1988, which is when I first saw the film, when my late sister and I took our first cousin (then about five-years-old) to see the movie.

I liked the film when I first saw it, and Walt Disney Home Entertainment’s recent release of an anniversary Blu-ray and DVD of the film gave me a chance to see it again. I still like, and though it may not be as good as such films as Bambi or Beauty and the Beast, The Fox and the Hound is a visually beautiful film full of gorgeous colors. It is a personal favorite of mine because it recalls fond memories of days gone by.

The Fox and the Hound is based upon the Daniel P. Mannix novel of the same title, but the film removes the element of death that is apparently a big part of the novel (which I’ve never read). The film tells the story of two unlikely friends, a red fox named Tod and a hound dog named Copper. The film begins with a young red fox being orphaned by its mother. Big Mama (Pearl Bailey), an owl, sets it up so that the fox is adopted by Widow Tweed (Jeanette Nolan), who names the fox, Tod (Keith Coogan).

Meanwhile, her neighbor, Amos Slade (Jack Albertson), brings home a young coonhound puppy that he names Copper (Corey Feldman), and introduces to his old hunting dog, Chief (Pat Buttram). Tod and Copper become friends, but that angers Chief and Slade, who hunts animals, including foxes, for their pelts. Tod and Copper remain friends, but their natural instincts begin to drive them apart. When they reach adulthood, Tod (Mickey Rooney) and Copper (Kurt Russell) must confront the reality of their situation – that they are natural enemies.

The Fox and the Hound, Walt Disney’s 24th full-length animated feature film, is considered average by some. The story isn’t as complex as some Disney films, and the songs are indeed mostly average. However, the film is a parable about how society demands that individual accept predetermined roles even in spite of an individual’s better impulses to do something different, so I give this movie credit for that. Its themes of prejudice and friendship outside of social circles make it memorable, and those themes resonate with audiences, both young and old. The film deals with prejudice in an intelligent way, particularly because Tod is actually the lead character. Thus, the audience sees prejudice and persecution directly through the eyes of the fox, who is basically the inferior.

The film is also very well animated. The character animation is quite good, particularly in the facial expressions, depictions of emotions, and general movement of the animals. Glen Keane, then part of a young generation of Disney animators, does stellar work in supervising the animation in the scene of the fight between Copper, Tod, and the bear. This is one of the great animated sequences in the history of Disney films.

Pearl Bailey also delivers the film’s best voice performance as Big Mama, although Mickey Rooney is quite good as the adult Tod. The Fox and the House may not be considered one of Walt Disney’s best, but with its vivid colors, lush forest and outdoor backdrops, and dynamic character animation, it represents what Walt Disney Animation Studio does best – create the illusion of life.