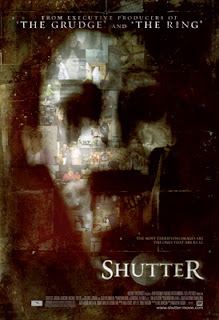 The new 20th Century Fox release, Shutter, is a remake of a 2004 Thai film (which was also remade in the nation of Tamil). It’s a unique blend of a Thai original turned J-horror (Japanese horror) by a Japanese director, Masayuki Ochiai (Saimin, Kansen), with American money.

The 2008 Shutter follows newlyweds Benjamin (Joshua Jackson) and Jane Shaw (Rachael Taylor) as they move to Japan for Ben’s new assignment, a lucrative fashion shoot in Tokyo. One evening, Ben and Jane are making their way home on a mountain road when Jane, who is driving the car, hits a young woman standing in the middle of the road. She seemed to have materialized out of nowhere, but later, the police cannot find a body, and the incident leaves Jane shaking.

Ben, having worked in Japan before, is fluent in Japanese and easily reunites with his old friends and colleagues, while Jane struggles to adapt and makes unsettling ventures into Tokyo. Taking her own photographs, Jane soon discovers mysterious white blurs – eerily almost human in form – appearing in these pictures. Soon, Ben’s expensive photo shoots are ruined when these ghostly blurs start appearing in his photographs. Jane comes to believe that the blurs in the photographs are evidence of the spirit of the dead girl she ran over on the road, come back to haunt her for leaving her body in the woods. However, the truth is far darker and may tear Jane’s new life apart.

Shutter eagerly follows the J-horror formula that made other American remakes of Asian horror films successful, including The Ring and The Grudge. It’s a formula that takes the angry ghost of a dead girl or young woman and sets her loose on the unsuspecting humans that either got too close to her anger or hurt her when she lived. Shutter, however, is more than just another Asian dead girl ghost story. Masayuki Ochiai makes Shutter a genuinely creepy affair, so full of moody atmosphere that this movie seems like a fog-drenched ghost story right off the damp cobblestone streets of some Victorian nightmare. The bumps, moans, footsteps, and assorted odd noises that make a scary movie unnerving are all here. The angry spirit materializes out of the dark areas behind characters and menacing shadows, always lurking around the corner, make frequent appearances.

Sure, Shutter is mostly formula. The script by Luke Dawson eschews delving into the surprisingly complex characters with their savory back stories in favor of working the frights and scares. If you easily buy into the kinds of ghostly scenarios presented by movies like The Grudge, you’ll wear Shutter’s layered ambiance of dread over your shoulders like a heavy cloak and clutch yourself in fear.