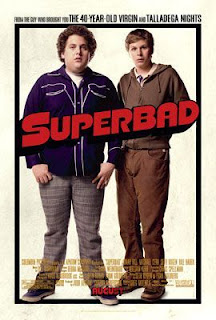 Sex, drugs, and booze may not necessarily make you happy, but they can make for an incredibly funny movie… in the right hands.

When he isn’t writing and directing hit films like The 40-Year-Old Virgin and Knocked Up, Judd Apatow finds time to produce hits like Anchorman: The Legend of Ron Burgundy and Talladega Nights: The Ballad of Ricky Bobby or the new film, Superbad. It’s the uproarious cautionary tale/coming-of-age story about two socially inept childhood pals. They are about to graduate from high school and go their own way when one panic-driven night reaffirms their super-close friendship.

It’s three week before they graduate, and they want to hook up with girls before they go off to different colleges. Thanks to a fake I.D. card that Fogell has obtained, Seth promises Jules (Emma Stone), a girl he lusts after, that he can buy some alcohol for a party she is throwing. Evan makes the same promise to Becca (Martha MacIsaac), the girl he’s always secretly loved. However, after a calamitous night of trying to score booze for the party that involves a convenience store hold up, two crazy cops, and another thoroughly adult party, Seth and Evan find overcoming separation anxiety is a bigger obstacle than getting girls and alcohol.

Before Superbad reaches the ten-minute mark, it already has more coarse and crude language than most mainstream comedies or many R-rated comedies for that matter have in their entire runtime. In spite of the raunchy language and racy subject matter, Superbad rings with honesty. Many viewers will find that to some extent it resembles their own high school lives, especially if they were born after the 1950’s. Writers Seth Rogen (who also stars in the film) and Evan Goldberg are smart enough not to divide the school into jocks and losers. In real high school, even the nerds and geeks know the beautiful people, at least in passing. It’s not as if a “loser” can never get to say “Hi” to the popular people and athletes.

In Seth and Evan, Rogen and Goldberg have created genuine high school kids and genuine high school pals. From the moment the two first appear on screen together, there is a moment of recognition in the viewers who are really paying attention. Seth and Evan’s adventures may be over the top and even dangerous, but we can laugh. In their raunchy verbal jousting, we recognize that the two say what they do because they don’t know crap about sex. We’ve all been there. If we’ve never spoken the vileness that they do, we feel the truth in their friendship and the pain in their coming separation as they enter adulthood.

Now, the overall plot and the thin story don’t amount to much, but that isn’t important. The fine cast of comic actors hits the right notes, and that is what’s important. Superbad feels like the real thing – one the very best high school comedies ever. Superbad is supergood.

Posted by Leroy Douresseaux at 9:58 AM