Raiders of the Lost Ark - 30 Years Later Still a Beast 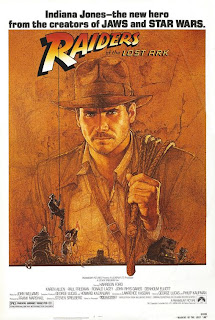 This month marks the 30th anniversary of the release of Raiders of the Lost Ark to movie theatres (specifically June 12, 1981). The 1981 American adventure film went on to become the top-grossing film of 1981 and spawned four sequels and a short-lived television series. The film introduced the still wildly-popular character, Indiana Jones, portrayed by Harrison Ford (with a few exceptions), to audiences. The creation of director Steven Spielberg and executive producer, George Lucas, Raiders of the Lost Ark showed that a family film didn’t have to be G-rated fare, but could be a movie with nonstop action and quite a bit of violence.

Raiders of the Lost Ark follows archeologist Indiana Jones (Harrison Ford), who braves ancient temples to retrieve archeological relics. After his latest adventure, Army intelligence officers seek Jones help in finding his old mentor, Abner Ravenwood. The officers also inform Jones that the Nazis, in a quest for occult power, are looking for the Ark of the Covenant, the chest the ancient Israelites built to hold the fragments of the original Ten Commandments tablets. Ravenwood is supposedly in possession of the headpiece of the Staff of Ra, an artifact essential in finding the Ark. Ravenwood is also an expert on the ancient Egyptian city of Tanis, where the Ark is believed to be hidden.

Jones discovers that Ravenwood is deceased and that his daughter, Marion Ravenwood (Karen Allen), is now in possession of the headpiece. With Marion in tow and the Nazis hot on their trail, Jones travels to Egypt, where enlists the help of an old friend, Sallah (John Rhys-Davies), a skilled excavator. Meanwhile, Dr. René Belloq (Paul Freeman), Jones’ arch-nemesis who always seems to beat him, has joined forces with the Nazis to find the Ark before Indiana Jones does.

I’m old enough to have seen Raiders of the Lost Ark in a movie theatre, and I also remember how much I loved the movie. I was flat out crazy about Raiders, and, as far as I was concerned, Indiana Jones was the man. I must have watched Raiders more than 20 times within a five year period after it was first released. I watched it a few times in the late 1980s and early 1990s because of the release of Indiana Jones and the Last Crusade (1989). Since then, I’ve watched bits and pieces, but I just recently sat down and watched the entire film. Do I still feel about Raiders of the Lost Ark the way I did after I first saw it and after I watched it countless times over the next decade? Yes.

It’s just a great movie, a magical summer movie. Raiders of the Lost Ark is fun and ingenious, in terms of story and also film technology, in the way only American-made adventure movies are. It has a sense of humor and the droll wit of the characters simply makes Raiders something special – something more than just another action movie with fistfights, gun battles, and chase scenes. The actors’ wit and style make it seem as if they are really into this movie and are determined to make us believe the outlandish, logic defying leaps the action and story often take.

Raiders of the Lost Ark may be an ode to the old movie serials of the 1930s and 40s (especially the ones produced by Republic Pictures), but it is a triumph that has stood the test of time better than the stories that influenced it. Every time I see Raiders of the Lost Ark, I am reminded of how much I love movies, and that makes up for the bad movies.