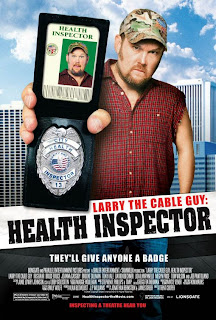 Larry (Larry the Cable Guy) is big city health inspector who is happy with his usual beat of greasy spoon diners, low-rent ethnic restaurants, and food stands where his good-old boy charm and down home attitude solves health problems better than a writing a citation. His easygoing job suddenly takes a turn for the worse when his boss, Bart Tatlock (Thomas F. Wilson) who hates him saddles Larry with a rookie partner, Amy Butlin (Iris Bahr), and a new beat.

Larry suddenly has to investigate a mysterious outbreak of food poisoning at the city’s swankiest restaurants that leaves patrons vomiting up their meals or heading for the toilets. Poor Larry only gets so far in his investigation as to infuriate chic restaurateurs and baffle his partner, Amy, but he still finds time to woo a waitress, Jane Whitley (Megyn Price), into a budding romance. However, when his failure to uncover the origin of the mystery illness endangers his job and reputation, Larry goes undercover to solve the crime in the most hilarious ways.

Many viewers know standup comedian Larry the Cable Guy (whose government name is Dan Whitney) from Jeff Foxworthy’s Blue Collar Comedy Tour, or have seen him on the Comedy Central, seen his hit DVD, and/or have heard one or more of his three hit comedy albums. Now, Larry, like numerous characters from “Saturday Night Live,” has a movie, Larry the Cable Guy: Health Inspector.

The film is vulgar, occasionally vile, and relentlessly and shamelessly cheap and tasteless. It opens with a shot of the crack of Larry’s butt and of him peeing in the shower, yet Larry the Cable Guy: Health Inspector is also one of the funniest movies I’ve seen in months. It’s not a romantic comedy. It’s a coarse raunchy comedy starring a comedian who has made a point of being as politically incorrect as possible. If you like Larry the Cable Guy, you’ll like this. If you don’t like Larry’s act, you will utterly hate this… unless you’re willing to give him a chance, and I think it’s worth the reward to give good old Larry a chance.

Health Inspector’s plot is convoluted, but the script is the perfect comic vehicle for a film that has to focus on a stage comic’s particular act. It has enough of the trappings of the crime genre to be a whodunit the way Scooby-Doo cartoons are detective stories. And since Larry the Cable Guy isn’t trying to become Larry the romantic comedy guy, a light crime story gives him room to clown and be himself. The entire mystery that this movie presents moves only as Larry’s act moves it, and that’s okay. Larry is a funny guy.

I’m not going to pretend that Larry the Cable Guy: Health Inspector is high quality filmmaking, but this is certainly a textbook example of giving the audience what it expects – lots and lots of raucous Larry. Flatulence, toilet humor, redneck jokes, country humor, gay jokes, ethnic stereotypes that will make you cringe, gross out humor, juvenile escapades: Larry does it all with a good-natured wink and a nudge. I’d love a sequel.