Review: "Transformers: Revenge of the Fallen" is Good/Bad 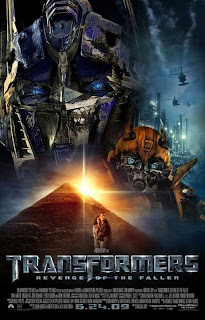 SCI-FI/ACTION with elements of drama, thriller, and war

Transformers: Revenge of the Fallen is a 2009 science fiction/action film. It is the sequel to the 2007 film, Transformers, the live-action feature film starring those ever-popular toys, Hasbro’s the Transformers. Once again, the human hero from the first film is caught in a war between two factions of alien robots, the Autobots and the Decepticons, but another adversary joins the fray – an enemy who wants to destroy the Earth’s sun to attain his goal.

Revenge of the Fallen takes place two years after the first film. Sam Witwicky (Shia LaBeouf), the hero of the Transformers film franchise, leaves the Autobots behind for a normal life. Sam is ready to move on with his life, which means leaving home to go to college, but Autobot leader, Optimus Prime (Peter Cullen), wants Sam to stay because the war to protect humanity from the Decepticons continues. Sam’s father, Ron Witwicky (Kevin Dunn), is ambivalent about his son going across country to attend college, and his mother, Judy (Julie White), is in full meltdown mode. Sam’s girlfriend, Mikaela Banes (Megan Fox), is also not happy with the move because she questions why Sam wants a long-distance relationship when he still can’t say “I love you” to her.

As he tries to adapt to college life, however, Sam finds his mind filled with cryptic symbols in the robots’ Cybertronian language that cause him to have short mental breakdowns. Meanwhile, the Decepticons reunite with their leader, a mysterious figure known as the Fallen (Tony Todd), and Megatron (Hugo Weaving) is brought back to life. Inside Sam’s mind is information that the Fallen wants, so the Decepticons target Sam and drag him back into the Autobots/Decepticon war.

Transformers: Revenge of the Fallen got some really bad reviews, and some considered it one of the worst movies of 2009. I liked it. Sure, the story is under-plotted and an actual full, working screenplay for this movie is probably nonexistent. This is way too long; two and a half hours – freakin’ puh-lease. What I love is all the special effects and CGI magic that brings the Transformers to life. All that twisting, shape-shifting, and, well… transforming are what piques my interest. I can barely tolerate the “character drama” between scenes of the Transformers tearing each other apart while smashing through buildings, bridges, and whatever infrastructure that happens to be in their way.

Truthfully, Transformers: Revenge of the Fallen only really works during the action scenes, especially during the last half hour. Those action set pieces are why I put up with what is an incredibly noisy film, which is sometimes like listening to an ADHD monkey banging pots and pans together.

The other element of the film that works for me is actor Shia LaBeouf. I must admit to being a fan of this talented young actor, but his character is saddled with bad secondary characters. This film’s script has no place for them, so they’re underdeveloped and stupid. Watching scenes with Shia’s Sam Witwicky means you have to put up with characters that are only a little more than mannequins. One big disappointment was that Revenge of the Fallen underplayed Josh Duhamel’s William Lennox and Tyrese Gibson’s Robert Epps.

But Transformers: Revenge of the Fallen temporarily fed my appetite for Autobots vs. Decepticons destruction, and I’m ready for more.