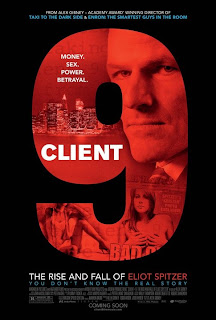 Client 9: The Rise and Fall of Eliot Spitzer is a 2010 documentary film from Oscar-winning documentary filmmaker, Alex Gibney (Taxi to the Dark Side). Client 9 takes an in-depth look at the rise and fall of Eliot Spitzer, former State Attorney General and Governor of New York. The film includes an interview with Spitzer, who was elected as the 54th governor of New York in 2006 and later resigned when he was exposed as being involved in a high-priced prostitution ring.

The film reveals Spitzer’s beginnings as a crusading state’s Attorney General who went after Wall Street, big banks, and big insurance companies for fraud, predatory lending, price fixing, etc. Then, Client 9 chronicles his downfall by interviewing the key players, including Spitzer’s Wall Street adversaries (such as Hank Greenberg and Ken Lagone) and political enemies, (like Joe Bruno). Gibney also talks to some of the people behind Emperors Club VIP, the high-priced escort service from which Spitzer obtained call girls. The film also looks the crusade that defined Spitzer’s public and professional life – fighting corruption on Wall Street and in New York state politics. This film also suggests that shadowy and powerful figures from Wall Street and Albany (the state capitol) likely played a part in revealing Spitzer’s patronization of high-priced prostitutes.

In some ways, Client 9 is less about Spitzer than about the corruption against which he crusaded, particularly corruption on Wall Street. Even the Emperors Club, which provided Spitzer with call girls, is connected to Wall Street because it services some of the financial industry’s big players. Although Spitzer does participate in this documentary, the former governor turned cable television pundit is careful, even guarded about what he says, which is understandable, but this reticence ends up making him an ensemble player in what should be a starring role in his melodrama.

The film does offer startling insight into the way the U.S. Justice Department prosecutes crimes involving politicians. Also, the press and news media, which is obsessed with sex and scandal and overly reliant (by my estimation) on tips and leaks that offer salacious details, doesn’t come out looking too good.

Compared to Gibney’s other films, Client 9: The Rise and Fall of Eliot Spitzer isn’t great, but it is good. Ultimately, it barely skims the surface of the darkness behind Spitzer and the institutions and people behind his rise and especially his fall.