"The Most Dangerous Man in America" Tackles Still-Riveting Topic 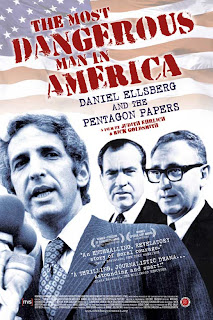 June marks the 40 anniversary of the New York Times’ first publication of excerpts from the Pentagon Papers (specifically June 13, 1971). Officially titled United States – Vietnam Relations, 1945–1967: A Study Prepared by the Department of Defense, the Pentagon Papers are a history of the United States' political-military involvement in Vietnam from 1945 to 1967. This study was initiated by the United States Department of Defense by order of then Secretary of State Robert McNamara.

Daniel Ellsberg, PhD, (born April 7, 1931) was a United States military analyst beginning in 1964 for the Pentagon under Secretary McNamara and then for the State Department as a civilian in Vietnam during the Vietnam War. Beginning in 1967, Dr. Ellsberg was at the RAND Corporation (a global policy think tank) where he worked on the top-secret study of classified documents that came to be known as the Pentagon Papers. This study was 7,000 pages long and was divided into 47 volumes.

Daniel Ellsberg is certainly an important man in modern American political history, and The Most Dangerous Man in America gives us a glimpse into his personal history, including details into a childhood tragedy, his time in the U.S. Marine Corps, and his relationship, courtship, and eventual marriage to his second wife, Patricia Marx.

However, Ellsberg is a doorway into the secret history of the Vietnam War, and though much of that history has been revealed, thanks in large part to Ellsberg, the majority of Americans are likely still unfamiliar with how the U.S. really got involved in Vietnam. For a long time, the official story was that the U.S. stumbled into Vietnam, and that’s not true. Understanding American involvement in Vietnam from 1945 to 1967 is crucial not only to understanding American foreign policy – how it works and why, but also to discovering how four U.S. Presidents lied to the American public about Vietnam.

Ellsberg and this film reveal that sometimes, even what is top secret should be made public. Perhaps, such revelations will protect the United States and its citizens both from dirty wars and also lying, even criminal Presidential administrations. None of the four Presidents mentioned here comes out looking good – especially Richard M. Nixon.