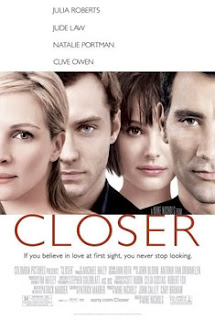 Mike Nichols directed the extraordinary Who’s Afraid of Virginia Woolf?, an adaptation of a stage drama, which earned Nichols an Oscar nom for direction. He won an Emmy in 2004 for directing another acclaimed stage play, Angels in America, this time for television. Nichols again guides a play to the silver screen with Closer, from Patrick Marber’s play.

The film focuses on four casual strangers, their chance meetings, instant attractions, and casual betrayals. Daniel (Jude Laws), a newspaper obituary writer, spies Alice (Natalie Portman), a waif who is also a stripper, in the streets of London. He falls for her. Later, Dan is instantly attracted to and falls in love with Anna (Julia Roberts), an American photographer and divorcee living in London. However, Dan inadvertently connects Anna with Larry (Clive Owens), a dermatologists, who falls deeply in love with Anna. The rest of the film follows this kind of love quadrangle and the emotional fallout from the betrayals these four commit against one another.

Closer is strictly an adult drama, and a damn fine one, at that. The language is frank, sexually explicit, profane, and straight razor sharp, and the characters certainly apply the blade to their relationships and lovers. Nichols, as he usually does, quietly allows the drama of the script to come to the surface and gives his actors the chance to bring some truth to the fiction, and boy, do they. Sometimes, it seems that some things in human sexual and personal relationships shouldn’t be onscreen, and I certainly thought that some of the drama in Closer went too far. Still, that doesn’t seem bad when it’s a skilled filmmaker doing it. Anyway, this is a formal and stylized version of the brutality that can result from deeply intimate relationships that are wrecked on the rocks of betrayal and infidelity, so it’s not too discomforting.

Although I consider the script to be the champion of this film, the cast is quite good in making this so riveting a drama when it could have struck a note as phony. Jude Law, Clive Owen, and Natalie Portman are especially potent. Natalie Portman makes another star turn, as if she hasn’t already done that, and we get to see how beautiful and how super duper fine her body is. What a knockout ass she has! Owen reeks of danger, aggression, wildness, vitality, and virility. Law is smooth and charming, and creates a three-dimensional portrait of self-obsession and romantic neurosis. Julia Roberts is good, but is the least of the four actors. She stands out a few times in the middle of the film, but overall, she seems determined not to stand out or chewy up the scenery. She supposedly likes to do ensemble work because she doesn’t want to always carry a film or stand out in front of everyone. Here, that attitude not to steal the spotlight hurts the film a little and her performance a lot.