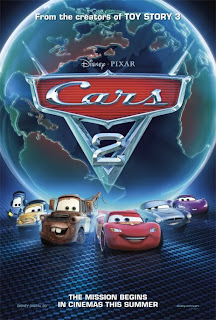 Pixar Animation Studios finally did it. They made a bad movie… a really bad movie. They made a loud, empty, action movie. It is full of sound and fury – signifying nothing more than new characters that can be turned into merchandise for the kids who are the only ones that will love this ridiculous movie.

Of course, I’m talking about Cars 2, the computer-animated film and sequel to the 2006, Oscar-nominated Cars. Cars 2, set in a world where talking cars and vehicles are the people, is a globe-trotting tale of car races, spies, and international intrigue. It’s like Cody Banks meets Ricky Bobby.

Cars 2 opens with everybody’s favorite rusty tow truck, Mater (Larry the Cable Guy), eagerly awaiting the return of his buddy, the champion race car, Lightning McQueen (Owen Wilson), to the sleepy burg of Radiator Springs. Soon after he returns, McQueen finds himself entered in the World Grand Prix, a race sponsored by former oil tycoon, Miles Axlerod (Eddie Izzard), and used to promote Axlerod’s new renewable fuel, Allinol. With Mater in tow, McQueen heads to Tokyo for the first leg of the World Grand Prix. Soon after they arrive, it becomes obvious to McQueen that Mater is having trouble behaving himself.

McQueen is busy with the first race, trying to beat his rival, FI racer, Francesco Bernoulli (John Turturro). Meanwhile, Mater falls into a bit of international intrigue when two British spycars, Finn McMissle (Michael Caine) and Holley Shiftwell (Emily Mortimer), mistake Mater for a spy. An evil scientist, Professor Zündapp (Thomas Kretschmann), has developed a device that can destroy race cars. If the plan to foil Zündapp relies on Mate, can the tow truck really save the day? Can he even save his friendship with McQueen?

The original Cars was a technological and artistic leap, particularly in how it animated the race cars that acted like humans and also the racing sequences. Cars 2 actually improves on that. It is as visually appealing as any other Pixar feature, but this movie isn’t any good. Cars 2 is a shiny, pretty, candy-painted car that is an unappealing lemon under the hood. This movie has the elements of a comic caper and spy spoof, but it isn’t funny and it spoofs the audience. Cars 2 is a series of action scenes stuck together to form a Frankenstein-like kids action comedy with a goofy plot, but no real story and little in the way of character. Cars 2 is tire-bursting action with a story as rundown as Mater looks.

Speaking of Mater: Cars 2 is his film the way Cars is McQueen’s film, and that is Cars 2’s saving grace. Larry the Cable Guy, the standup comedian who is the voice of Mater, can be a funny guy, even as a comic actor. His rapid-fire verbosity and one-liners provide most of this movie’s few laughs.

And that’s sad. Cars 2 is so mediocre that it is hard to believe that it is a Pixar production. I dozed off four times during this movie, and I was desperate for it to end so that I could speed away from this awful movie.

Posted by Leroy Douresseaux at 11:50 AM