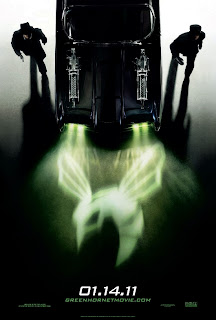 A masked vigilante, crime-fighter, and superhero, the Green Hornet is a fictional character that first made his debut on radio in 1936. Created by radio station owner George W. Trendle and radio writer Fran Striker, the Green Hornet has also appeared over the years in comic books and movie serials. There was even a 1960s ABC television series probably best remembered for Bruce Lee playing the Green Hornet’s partner/sidekick, Kato.

Released in January 2011, The Green Hornet returned the character to the big screen in an over-the-top, superhero action-comedy movie. The movie is like a juvenile boy’s fantasy of what a superhero movie should have: plenty of explosions, numerous car-crushing car chases, and lots of gunfire, with a pretty girl thrown in for an occasional shot of eye candy. And sometimes, this movie is actually fun and entertaining.

The Green Hornet opens in present day Los Angeles and focuses on spoiled, rich, 20-something, Britt Reid (Seth Rogen). His father is James Reid (Tom Wilkinson), the wealthy and highly successful publisher of The Daily Sentinel newspaper. After James’ sudden death, Britt is trying to figure out what to do with his father’s business and his own life when he meets his father’s personal mechanic, Kato (Jay Chou). They hit it off, get drunk together, and pull a stupid stunt. It is that dangerous stunt that gives Britt the idea that he and Kato should become superheroes.

Britt believes that they should become crime-fighters who pose as criminals in order to infiltrate L.A.’s notoriously violent criminal underworld, so he becomes a masked man named the Green Hornet. Britt also decides to use the Sentinel to publish propaganda that will build up the Hornet’s reputation. Britt even hires Lenore “Casey” Case (Cameron Diaz), a sexy secretary to do criminal research that he can use as the Hornet. However, Britt’s activities as the Hornet bring him into direct conflict with Russian super bad-ass, Benjamin Chudnofsky (Christoph Waltz), a mobster who wants to control all crime in L.A. But Chudnofsky is willing to kill anyone and any hero who gets in his way.

One of the things that immediately stood out to me about The Green Hornet was that Seth Rogen was probably not the right actor to play the Green Hornet. I could believe in him as the spoiled, party boy, Britt Reid, but not as any kind of superhero or masked crime-fighter. I spent the rest of the movie going back and forth on my feelings about Rogen. That’s the problem with this movie. Some of it works, and some of it is lazy and sloppy; even some of the stuff that works sometimes falls flat.

Rogen co-wrote this film with his partner, Evan Goldberg; the two wrote an incredible script for the film Superbad, a film that flowed seamlessly. The Green Hornet isn’t seamless. You can practically see all the giant, noisy set pieces sewn together to create this Frankenstein of an action-comedy. The problem isn’t that some of this movie is over-the-top; it is that The Green Hornet is nothing but over-the-top. There is rarely a moment of this movie that isn’t about violence and vulgarity and assorted rudeness.

I have to give credit where credit is due. While the film wastes Cameron Diaz and her good character, Lenore, it makes the most of Christoph Waltz’s cold-bloodied turn as the really scary Chudnofsky. [It’s best that we not speak of how the filmmakers under-utilized Edward James Olmos]. The film also has a genuine star in Taiwanese pop idol Jay Chou as Kato.

For some reason, Chou actually has good screen chemistry with Rogen, or at least I think so. When they are together as the Green Hornet and Kato, Rogen and Chou take control of the hysteria and bombast. That is why, here and there, The Green Hornet is more action-comedy dynamite than it is film flatulence.