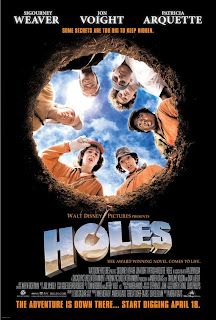 DRAMA/FAMILY/MYSTERY with elements of adventure and comedy

Stanley Yelnats (Shia LaBeouf) is dogged by the bad luck stemming from an old curse on the Yelnats, and it gets him in trouble with the law when he’s wrongly accused of stealing the prized shoes of an athlete named Sweet Feet (Rick Fox). For this, a judge sends Stanley to Camp Green Lake, a very weird work camp for male juvenile offenders that isn’t very green and isn’t a lake; it seems that Green Lake may also be laboring under a curse.

At the camp, he meets a colorful cast of campmates, and like them, he has to dig a hole a day to keep The Warden (Sigourney Weaver) and her henchmen, Mr. Sir (Jon Voight) and Dr. Pendanski (Tim Blake Nelson) at bay. There is, however, more to digging those holes than just the character building Mr. Sir says digging gives a boy. Stanley’s family history is somehow tied to incidents that happened a century ago where Camp Green Lake stands today, and Stanley and his new friend, Hector Zeroni or “Zero” (Khelo Thomas) are going to solve that old mystery, even if it gets them in trouble with The Warden and endangers their lives.

In Holes, the star of the film is not the setting, although the rundown camp and desert add a sense of foreboding and mystery to the film. The star is also not the story, which is intriguing with its twists and turns, interconnectedness with the past, and the fact that characters from the past are related to some in the present. Holes’ star, its center of radiance, is then-16-year old Shia LaBeouf, although his name was fourth on the marquee, behind the better-known adult actors. Shia drives this film, and the narrative sometimes drifts when it shifts away from him, especially when it shifts to the past. Shia epitomizes the average kid who rises to the challenge – a Harry Potter type, and that talent is this film’s charm.

I liked the central mystery and Holes’ resounding message about family and legacy. The mild turn of the 20th-century romance, that happens in a series of flashbacks during Stanley’s time at the camp, can feel a little jagged (because it was such a dangerous thing for two people to do), but the romance only adds to this Holes’ sense of peril and risk. Tim Blake Nelson stands out amongst the adult cast, and it’s always good to see Sigourney Weaver on the big screen. The rest of the boys in the camp seem woefully underutilized, but even their relatively small parts help to make Holes a compelling family drama and a winning juvenile mystery.

Posted by Leroy Douresseaux at 12:13 PM