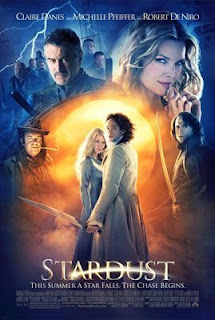 Matthew Vaughn, the acclaimed director of Layer Cake, adds one more eclectic film to his young filmography, the late Summer 2007 film, Stardust, an adaptation of the novel written by Neil Gaiman (American Gods) and illustrated by Charles Vess. Although Stardust proved to be excellent late summer, counter-programming to the normal empty big budget fare that crowds movie theatres during the warm months, it failed to catch on with American audiences. That’s sad, really.

Young Tristan Thorne (Charlie Cox) lives in the sleepy English village of Wall, which is named for the cobblestone wall that has for eons kept the villagers safe from the supernatural parallel universe that lies just on the other side of the wall – the fantastical realm of Stormhold. One evening, Tristan makes a promise to the prettiest girl in the village, Victoria (Sienna Miller), whose heart he hopes to win, when the two spy a star falling from the sky and landing on the other side of the wall. Tristan pledges to Victoria that he will bring back the star for her hand in marriage.

Crossing the forbidden wall, Tristan makes his way to the star’s crash site only to discover that the star is different from what he expected. It is a spirited young woman named Yvaine (Claire Danes), injured by her tumble from the heavenly firmament. However, before he can get Yvaine back to his home, Tristan must protect her from the chilling witch, Lamia (Michelle Pfeiffer), who wants to murder Yvaine and use the star’s heart to achieve eternal youth and beauty. With the help of an eccentric pirate, Captain Shakespeare (Robert De Niro), Tristan and Yvaine evade the clutches of Lamia and anyone who wants to harm her, but in his adventure through Stormhold, Tristan may finally discover the secrets of his own past.

There are no elements in Stardust that can be described as “great,” except for Michelle Pfeiffer’s truly inspired performance as Lamia, but when all the components are brought together, they make a film that is an exceptional screen fantasy. Matthew Vaughn brings together all the elements: odd components from the original story and peculiar screenplay adaptation; the eccentric performances, and the knotty, but imaginative production work of his creative crew (cinematography, production design, score, etc.), all of which create a convincing fantasy world. It’s a world that the more audiences buy into the setting; the more they are willing to vicariously experience Tristan and Yvaine’s adventure.

As for the performances, the aforementioned Ms. Pfeiffer really stands out as Lamia. Her performance is one of those charming displays of acting that critics describe as delicious, and if that’s the case, Pfeiffer prepares a feast. She’s wicked with an extra dose of wickedness, but her evil is so luminous and Pfeiffer looks so good that Lamia is like a beautiful poison thing.

The rest of the cast is good. Claire Danes and Charlie Cox don’t exactly burn up the screen as the star-crossed pair, but they work in the context of the film. It’s much the same with Robert De Niro’s performance. De Niro’s Captain Shakespeare works best when paired with Dexter Fletcher’s Skinny Pirate. It’s all a matter of the right ingredients coming together at the right time in the right place. Perhaps, that’s the best way to explain why Stardust works – it’s all about chemistry.