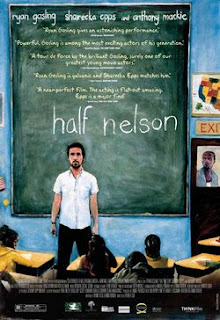 In the independent film drama, Half Nelson, an inner-city schoolteacher and one of his students form an unlikely friendship that just might help him pull it together and stop her from following her brother into prison.

Dan Dunne (Ryan Gosling) is anxious to help his students learn outside the parameters of what is accepted in public schools, but each day that he’s in front of his class, it is clear that his mind is elsewhere. Dunne is a frustrated novelist and a drug addict who knows he’s in trouble but won’t stop using illegal drugs. Drey (Shareeka Epps) lives in a small apartment with her divorced mom, and her father chooses to live outside of her life. Her brother is doing a stint in prison, apparently for his dealings with Frank (Anthony Mackie), the neighborhood drug dealer. Now, Frank is trying to recruit Drey into his service. As Dunne spirals downward, he is surprised to find Drey acting as his conscience, when he plans on being hers.

Co-writer/director Ryan Fleck and co-writer Anna Boden are so intent on not offering easy answers and pat resolutions in their film, Half Nelson, that they almost ruin it. They’ve made an underwritten, slice-of-life movie. Instead of giving Half Nelson a beginning, middle, and ending, they instead act as if they’re making a docu-drama and are presenting just the facts – thank you very much and can’t (and perhaps shouldn’t) make judgments.

Luckily, at the heart of their film sit two outstanding acting performances. First, Ryan Gosling, who seems to be on the cusp of greatness (or is at least still a simmering “next big thing”), delivers a sharp and heartrending performance as a druggie teacher that is as harrowing as it is quiet and graceful. Gosling doesn’t glamorize drug addiction, nor does he play teacher Dan Dunne as some kind of trashy lowlife always dressed in filthy rags. Dunne is woefully in denial and, therefore, helpless against his addiction. We can feel sorry for him, while simultaneously being tired of his self-destructive ways.

Meanwhile, Shareeka Epps as the inner city, almost-lost girl Drey offers a stout and stoic face to the world. It’s as if Epps realizes that the only way that Drey survives her life of sorrow and loneliness is to keep a stiff upper lip, so Drey offers a facial expression that might make Clint Eastwood’s Dirty Harry blink. Still, Epps allows us to see underneath to the vulnerable girl who isn’t so sure that she isn’t destined to end up an incarcerated drug dealer like her brother.

Anthony Mackie, as the neighborhood drug kingpin, also offers Half Nelson a fine performance. Mackie’s Frank is a sly salesman who wears his dishonesty and predatory ways on his sleeve as if they were banners of personal pride. Mackie makes Frank dangerous without grandstanding or scene stealing, which is what most actors do when they play drug lords and dealers.

What Gosling, Epps, and Mackie offer is substance to Fleck and Boden’s faux and cheapie realism. They make Half Nelson a standout film when it could have been just another pretentious, underwritten independent drama.

NOTES:
2007 Academy Awards: 1 nomination for “Best Performance by an Actor in a Leading Role” (Ryan Gosling)