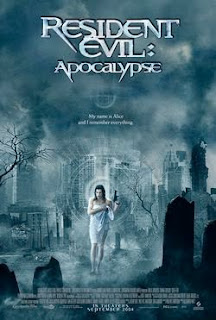 ACTION/HORROR with elements of sci-fi

After barely surviving the zombie infestation/lab tragedy in Resident Evil, Alice (Milla Jovovich) wakes up in a Raccoon City hospital. Outside, Raccoon City is now a city of the stalking dead, as the T-virus that turned man and beast into the flesh-eating ghouls of the first film has escaped from the Hive into the city, and most of the residents are now zombies. Alice and a band of survivors of the new outbreak must find the daughter of a Hive scientist if they want his help to escape the city. However, Alice must also face Nemesis (Matthew G. Taylor), a creature/super soldier created by Hive scientists using the T-virus as a catalyst. They apparently also experimented on Alice in between her escape from the Hive and her waking up in a hospital. And now, Alice is quite the super girl, but will it be enough to save her and the other survivors?

Resident Evil: Apocalypse is not nearly as good as the first film, and it almost falls into the category of awful movies based upon video games. However, Apocalypse is what the first film was: a very scary zombie movie that might make someone jump from his seat. The creatures are quite effective. Who knew that a little makeup would make so many actors and extras be such convincing flesh-eating ghouls. The action scenes are warmed over video game sequences and retread action movie clichés. It is, however, nice to see Milla Jovovich and her stunt doubles flying around and kicking behinds, and the Nemesis character is actually pretty cool. Luckily, the genuinely funny Mike Epps is on hand to add some really nice comic relief. Would that he performed more house calls like this for many lame action movies.