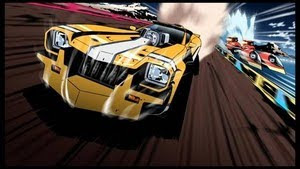 VIZ CINEMA REVS UP THE EXCITEMENT FOR THE U.S. PREMIERE OF ANIME RACING FILM REDLINE

VIZ Cinema, the nation’s only movie theatre dedicated to Japanese film, brings on the excitement for October with a very special North American premiere of the anime feature Redline. Creative wizard Katsuhito Ishii has teamed up with spirited director Takeshi Koike for the film, which will screen at the theater – for one week only – October 8th -14th, the same week of its release in Japan. Tickets are $10.00. Screening times, trailers and tickets are available at: www.vizcinema.com.

Written by Katsuhito Ishii (Director of The Taste of Tea, Funky Forest, Shark Skin Man & Peach Hip Girl and the anime segment of Kill Bill Vol.1) and directed by the up-and-coming Takeshi Koike, who participated in the “World Record” segment of Animatrix (2003), Redline was 5 years in the making and proudly demonstrates the new possibilities of 2D animation, amidst the current prominence of 3D.

“The release of Redline has been highly anticipated by fans and we’re very proud to premiere the film at VIZ Cinema,” says Seiji Horibuchi, the founder of NEW PEOPLE and President and CEO of VIZ Pictures. “The kinetic visual action follows a fine tradition of car films like The Fast And The Furious, Death Race and Initial D. We invite import racers, car fanatics, anime and action fans to catch this exciting feature!”

Redline is a racing film created by studio Madhouse (Paprika, The Girl Who Leapt Through Time, Summer Wars). The toughest and the most destructive underground car race in the universe, REDLINE, has just begun! JP is a reckless driver oblivious to speed limits, and Sonoshee, one of his competitors with whom JP is secretly in love with, is a hot girl determined to do whatever it takes to stand on the winner’s podium. In order to win the finals, they’re up against the craziest drivers with their heavily armed and awesome road-tearing vehicles. On top of that, during the race, they have to avoid military crackdown by the government because the race is actually prohibited in Roboworld. The only help JP wants is the engine obtained and custom tuned by his long time buddies, Frisbee the mechanic and Mogura Oyaji the junk shop. While cars crash and burn into flames, the race course becomes a merciless hell and JP whips his ride into a dead heat. Who will survive to win in this mass-destruction race?\


About NEW PEOPLE
NEW PEOPLE offers the latest films, art, fashion and retail brands from Japan and is the creative vision of the J-Pop Center Project and VIZ Pictures, a distributor and producer of Japanese live action film. Located at 1746 Post Street, the 20,000 square foot structure features a striking 3-floor transparent glass façade that frames a fun and exotic new environment to engage the imagination into the 21st Century. A dedicated web site is also now available at: http://www.newpeopleworld.com/.
Posted by Leroy Douresseaux at 8:00 AM