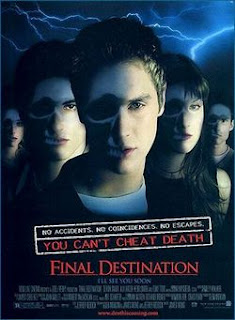 HORROR/THRILLER/MYSTERY with elements of action

A group of seven, six students and a teacher, disembark from an airplane that eventually explodes less than a minute after it leaves the runway. It all begins when student Alexander “Alex” Chance Browning (Devon Sawa) has a vision of his and his fellow passengers’ demise as the plane falls disintegrates around them. The survivors are left in shock, and Alex quickly becomes a pariah because of his vision of the plane’s destruction. Because of the strangeness of Alex’s vision, local FBI agents are suspicious of him. He begins to have more visions and premonitions of death returning for he and the other survivors, and the only one who shares his dread is a fellow outcast, Clear Rivers (Ali Larter). One by one, the survivors begin to die mysteriously, as Alex races against time to unravel the puzzle of death’s design.

Final Destination fits in neatly with the wave of late 90’s teen thrillers and horror films, but it really works as a supernatural suspense thriller. It has an interesting premise built around the idea of a person having a specific time to die: if you avoid some accident that could have or was meant to kill you, are you really cheating death? Can you cheat Death? If you deny Death your life, what do you have to do to keep cheating Death if he keeps coming back for his prize?

Producer/co-writer Glen Morgan and director/co-writer James Wong are not strangers to the weird, both having worked on the television programs “The X-Files” and “Millennium.” They’ve created a nice, little thriller with enough bumps, shimmering shadows, and chilly atmosphere to keep an audience stuck to the back of their seats. The idea of death lurking around the corner and setting up fatal accidents like a snickering, prank crazed teen raises the hackles. This is one you watch with the light on; it gives you a feeling of dread, that impending sense of doom from the opening scene to the last frame. In a world of sloppy horror films and scary movies that sometime limp to an end, a movie that can keep its premise erect from start to stop is too good to pass.

Posted by Leroy Douresseaux at 9:06 AM