Review: Walt Disney's "The Black Cauldron" Has a Good Side 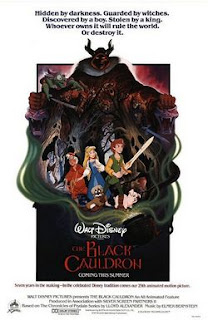 Considered a box office failure and a critical disappointment, The Black Cauldron, released in 1985, was Walt Disney’s 25th full-length animated feature film. The film is a loose adaptation of The Chronicles of Prydain, a five-book children’s fantasy series from author Lloyd Alexander, specifically the first two books, The Book of Three and The Black Cauldron.

The film takes place in the land of Prydain and focuses on a young man named Taran (Grant Bardsley), the Assistant Pigkeeper to the enchanter, Dallben (Freddie Jones). Dallben has charged Taran with the task caring for and protecting Hen Wen, a magical oracular pig (meaning she can see into the future). Hen Wen’s powers will allow her to see the location of the mystical Black Cauldron, which has the power to raise the dead.

The evil lord known as the Horned King (John Hurt) desires to use the cauldron to create an invincible legion of undead warriors that will help him conquer the world. When he loses Hen Wen, Taran must battle the Horned King, who will stop at nothing to attain Hen Wen, his key to the cauldron’s whereabouts. Luckily, Taran gathers new friends who come to his aid, including the imprisoned Princess Eilonwy (Susan Sheridan); the elderly bard, Fflewddur Fflam (Nigel Hawthorne); and a loyal, but greedy creature named Gurgi (John Byner).

In terms of quality, The Black Cauldron would certainly rank at or near the bottom of the list of Disney’s animated theatrical films, but even something considered a Disney failure is better than animated films from other studios. The characters and the story are the problems with this film. The characters are not fully developed, and the script doesn’t reveal much about them except for the barest minimum needed to make the story move forward. The story does not have much drama, and the conflict seems feigned. There is not much suspense and tension before the end of the film and the final conflict.

Where the film really works is in the visuals. The Black Cauldron was the first Disney animated feature to use computer-generated imagery (CGI), but the star is the beautifully drawn, colored, painted, and illustrated world Disney’s artists created for this film. The backgrounds, sets, and environments are some of the most beautiful fantasy art created for film. A lovely pastoral cottage farm, verdant forests, a barren wasteland, an ominous castle, cavernous dungeons, the magical underworld of the Fair Folk, and the gloomy dwelling of three witches: all are presented in vivid, rich color and drawn in a sturdy manner that brings Prydain to life.

These splendid visuals make a weak fantasy story a bit stronger. The Black Cauldron may not be perfect, but its trip to Prydain is a true journey into fantasy.