The Expendables is the Real Kick Ass 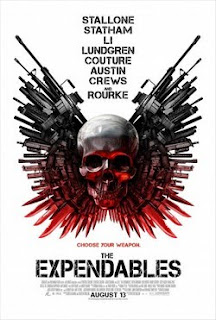 The late summer 2010 box office season has offered one surprising gem, The Expendables, an explosive action film co-written, directed, and starring Sylvester Stallone. Much has been made of this film being a throwback to the old macho, testosterone-fueled action films of the 1980s. Indeed, this movie does have a First Blood and friends, Team Rambo vibe to it. In fact, 80s action stars, Arnold Schwarzenegger and Bruce Willis, swagger (and wheeze a bit) through cameo appearances.

The Expendables, however, isn’t some homage, parody, or sentimental recollection of action movie days gone by. The Expendables is an authentic ass-kicking, ass-stabbing, cap-popped-in-ass action movie, and boy, is it good. [No panty-waists allowed!]

Ross accepts a high-paying assignment from the mysterious “Mr. Church” (Bruce Willis) to assassinate General Garza (David Zayas), the brutal dictator of (fictional) Vilena, a small Caribbean island nation. On a reconnaissance mission, Ross and Christmas learn that Garza is being backed by James Munroe (Eric Roberts) a corrupt ex-CIA agent. With his henchmen, Paine (Steve Austin) and The Brit (Gary Daniels), Munroe manipulates Garza and his military into terrorizing the island’s inhabitants, while Munroe seeks to control the drug trade he once fought as CIA. Inspired by Sandra (Giselle Itié), a beautiful islander, Ross becomes determined to stop Munroe and Garza, even if he has to do it alone – although his Expendables obviously won’t let him.

I don’t remember 80s action movies being quite as violent and as gory as The Expendables, although Die Hard 2 had an equally high body count. The violence, however, is not a problem for me. Movies like the Jason Bourne franchise and the recent Live Free or Die Hard offer so much high-tech gloss that the low-tech, bloody mayhem of The Expendables is like cool, sweet lemonade on a scorching hot summer day. This is a meat and potatoes action movie in which brute force does the ass kicking without computerized weapons.

Of course, the acting is mostly mediocre, but still surprisingly sincere. Watching The Expendables, you might get the idea that these guys had fun making this movie, but still took their work very seriously. Jason Statham is the standout here, and Terry Crews’ Hale Caesar should have had more screen time, while Jet Li’s Yin Yang felt extraneous.

Stallone has surprised everyone and made a real action movie, a man’s man action movie. At his age and after plastic surgery, Stallone is starting to look like Boris Korloff’s Frankenstein. Still, by sticking to his old guns, he and his cinematic kitchen staff have made an action movie meal that sticks to the ribs. Hollywood should ask for The Expendables’ recipe.