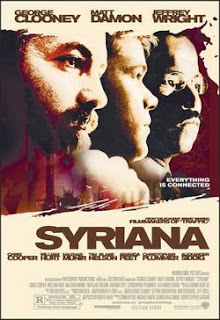 In 2000, Stephen Gaghan won the “Best Adapted Screenplay” for the 1999 film, Traffic, which took a look at drug-trafficking through several different points of view, each one a sub-plot in the film, making Traffic not only one film, but a movie composed of several mini-movies. Gaghan, now as both writer and director, tries that method again with the film, Syriana, a politically-charged thriller about the international oil industry, oil trading, and the politics as seen through the eyes those personally involved in the business and politics and those affected by business and politics behind energy.

Syriana, even more so than Traffic, is a riveting, but cerebral political thriller that demands that the viewer pays attention, rather than “turn his brain off” as he or she would in a sit-back-and-enjoy, special effects-laden thriller. The film follows characters from the brokering rooms and halls of power in Washington D.C. to the oils fields of the Persian Gulf, and weaves multiple storylines that look at the human consequences of the decisions of the wealthy and powerful oil players.

A murder plot that he is initiating in Beirut, Lebanon goes bad for Bob Barnes (George Clooney), a career CIA operative. Suddenly, circumstances beyond his control mark him as a failure, and Barnes becomes the subject of an FBI investigation. Relegated to a desk job, he begins to wonder about the disturbing work to which he’s dedicated his life.

The target of Barnes’ assassination plot was the handsome and charismatic Prince Nasir Al-Subaai (Alexander Siddig). Nasir makes a deal with a Chinese company for his country’s natural gas drilling rights, a arrangement that will bring more money to the nation than a similar deal with an American oil company, Connex Killen. He finds a kindred spirit in Bryan Woodman (Matt Damon), an oil broker/energy analyst, who discovers that an horrifically painful family tragedy has given him a lucrative deal with the idealistic Gulf prince. Nasir is the apparent heir to the throne of his country, and his father, the Emir Hamad Al-Subaai (Nadim Sawalha) is ill. However, Nasir’s younger brother, the callow and not bright Prince Meshal (Akbar Kurtha), is more amenable to American interests, so the Americans, in particular Connex Killen, are angling to have the Emir (king) chose Meshal as his successor.

The American oil company Connex Killen is the result of a recent merger of two energy entities – Connex, a Texas energy giant, and Killen, a smaller Texas oil company. Killen and its owner, Jimmy Pope (Chris Cooper), also used shading dealings to land drilling rights to coveted oil fields in Kazakhstan, which also lands them under an investigation by the U.S. Justice Department. Bennett Holiday (Jeffrey Wright) is a quiet, but highly ambitious Washington attorney at Sloan Whiting. It is his job to get the Connex Killen merger through the Justice Department. Holiday, subtle and very smart, must give the federal investigators enough material to make their case against Killeen for its shady dealings in Kazakhstan without jeopardizing either the deal or the merger with Connex.

Ultimately, the machinations of all these men play a part in the life of Wasim Kahn (Mazhar Munir), a young man from Pakistan who works in the Gulf oil fields with his father. After being laid off because of Nasir’s deal with the Chinese, he becomes angry and disillusioned. The Pakistani teenager and his friend Farooq (Sonnell Dadral) join a madrassa, where they fall under the sway of The Cleric (Omar Mostafa) a mysterious blue-eyed Egyptian. He is the same man who took possession of one of the Stinger missiles Bob Barnes sold to arms dealers in Tehran, Iran at the beginning of the film.

Syriana lacks the shaky camera work and rapid editing director Stephen Soderbergh used to give intensity to the Stephen Gaghan-penned Traffic. Gaghan’s film is subtle and eschews the documentary style atmosphere Traffic had. Syriana’s labyrinthine plot and convoluted script snake through a massive ensemble of players, of which very few are more important than others. Even someone with only a little screen time impacts the narrative, shaping the paths of other characters.

Although all the characters are interesting and the performances of them are nice, only two stood out to me. First, Alexander Siddig’s Prince Nasir is a driven man, and Siddig tells as much about the character through his face as he does through the script. Nasir is clearly a man of ideas, a leader and a charming and captivating one at that, but Gaghan only gives Nasir one scene in which he gets to show his ability to lead. That one scene, with generals and other leaders of his country, actually strikes as a bit hollow because there was never any indication prior to that that Nasir would go so far to assure his ascendancy to Emir. Nasir is essential to Syriana’s concept and more of him would have solidified the film’s ideology, but Gaghan ultimately leaves him bare (at least in this cut of the film, which apparently existed in a longer version before it hit U.S. theatres).

The other stand out character is Bennett Holiday, and in the role of Holiday, Jeffrey Wright gives Syriana’s best performance. Like the film, Wright’s Holiday is quiet, but determined. Delicately and with restraint, Holiday will achieve his means. Holiday is actually more successful in his venture than the film in which he exists. Wright makes Holiday Syriana’s focal point; basically, he is the point at which all sub-plots meet or he determines the resolution of others. Holiday, like Syriana, is pragmatic and not very judgmental. Clearly he knows right and wrong, and Syriana obviously believes that much of what people and nations do for the wealth and power that oil and natural gas gives them is harmful to their own long term interests and the immediate well being of many humans, but Holiday is pragmatic, and, to a lesser degree, so is Syriana though the creators might not admit that.

Still, Syriana is about how the world is than about how the world should be. Sometimes, the film’s tagline, “What is the price of oil?” seems like a rhetorical question. We can agree that the actions of many of the film’s players (and there real life counterparts) are selfish, harmful, and wrong, but things are what they are. Perhaps, Syriana is asking us to consider the ramifications of how we get our energy, but a lot of the film’s message and action are to the imagination. Gaghan is clearly sending his message to a more thoughtful film audience. He doesn’t expect the rank and file Joe Blow to give a hoot how the fuel gets to his four-wheeler, or what the ultimate cost of getting it there is. He does expect people who claim they care and are interested, regardless of their political affiliations and ideologies, to take this and create action. What that action is and how it benefits all of humanity is not answered, but I can guess it involves humans being less dependent on oil.

Sadly, the film is too short, sometimes oblique, and occasionally vague. The film’s star, George Clooney, is actually the star of a truncated sub-plot in Syriana. If given more screen time, Bob Barnes’ storyline would have been an edge-of-the-seat international thriller – the dessert portion of Syriana’s gourmet meal. I couldn’t help but leave the theatre wondering about what could have been. Still, what we do get is damn good.