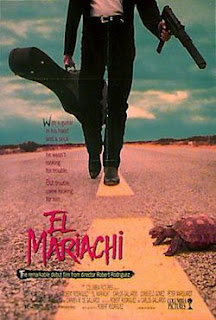 The virtual one-man film studio, Robert Rodriguez, introduced himself to audiences around 1993 with his film, El Mariachi. The film, which garnered Rodriguez and his producing partner, Carlos Garner, an Independent Spirit Award for “Best First Feature,” chronicles the travails of an unnamed traveling musician known only as El Mariachi (Carlos Gallardo) who is mistaken for Azul (Reinol Martinez), a murderous criminal who carries his arsenal in a guitar case.

Both El Mariachi and Azul dress in black and carry a guitar case. Azul goes on a murdering rampage to get money owed to him by a former criminal associate, Mauricio (Peter Marquardt), also know as Moco. Azul kills several of Moco’s men, so Moco sends some of his hired killers out for Azul. They mistake El Mariachi for Azul; however, the musician is capable of defending himself, and he kills several of Moco’s men. El Mariachi takes up with a local bar owner, while he tries to straighten the mess he’s in, but it’s still all heading for a violent confrontation.

El Mariachi also won the “Audience Award” at the 1993 Sundance Film Festival, and Columbia Pictures bought the film and distributed it later in the year. Like everyone who has seen it, I’m amazed that this tense, action thriller was filmed for $7,000. The truth of the matter is that Rodriguez is just super skilled at making the most of what he’s got, even if it’s very little.

The actors are mostly amateurs and people off the streets in a small town in Mexico, but Rodriguez makes them look like professionals. The action sequences are more riveting than those from most big-budget action movies. El Mariachi is a gun-slinging modern western that gives life to the genre, although its setting is almost a century after the setting for traditional westerns. Rodriguez takes “The Man with No Name” attitude of such Clint Eastwood films as The Good, the Bad, and the Ugly and A Fistful of Dollars and turns it into a raw, unpolished street fight. This is brilliant, bravado filmmaking that is perfect for action movie fans and movie lovers.