Review: Steve Martin is His Usual Self in 2006 Version of "The Pink Panther" (Happy B'day, Beyonce) 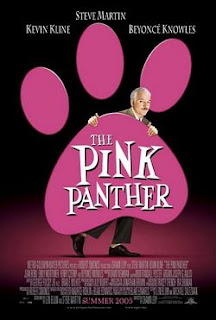 COMEDY/CRIME with elements of mystery

In the 2006 version of The Pink Panther, France’s greatest soccer coach, Yves Gluant (Jason Statham), is murdered in front of tens of thousands of people during a match, but no one knows who the murder is, and to make matters worse, his world famous diamond ring, The Pink Panther, is missing. Chief Inspector Dreyfus (Kevin Kline) wants to solve the case without the interference of the press, so he promotes small town policeman, Jacques Clouseau (Steve Martin), to inspector.

However, Dreyfus wants the new Inspector Clouseau watched, so he assigns a veteran officer, Gendarme Gilbert Ponton (Jean Reno), to keep an eye on Clouseau. Meanwhile, the bumbling Clouseau has taken on the case of Gluant’s murder as if he were France’s best officer of the law. He questions all of Gluant’s rivals and shady associates (usually asking the dumbest questions), but he falls under the spell of Gluant’s beautiful girlfriend, an international pop singer named Xania (Beyoncé Knowles). Could Xania be Gluant’s murderer, and does she have the Pink Panther? Clouseau is willing to follow her to America to find out.

What’s the point of another Pink Panther film, especially since Peter Sellers, the actor who originated the character in the 1963 film, The Pink Panther, and defined him in A Shot in the Dark, is long dead? Well, the grave was already desecrated long ago when Pink Panther franchise director Blake Edwards had Roberto Benigni try to fill Sellers shoes by playing Inspector Clouseau’s illegitimate offspring in Son of the Pink Panther (1993). When the announcement came last year that Steve Martin would become the new Inspector Clouseau, there was some excitement among movie fans and the entertainment press, but I was wary. But in this new film, also entitled The Pink Panther, Martin is his reliably funny and silly self. He doesn’t deliver the kind of comedy he did from the 1970’s to the mid-80’s, but that was decades ago; regardless of style and content changes, he’s wild and funny (if not as crazy) guy. All that matters is that in this movie, he is damn funny.

If you put Sellers’ Clouseau out of your mind (and it’s possible to do), you will find Martin’s take on the character to be exceedingly silly and amazingly funny. Martin, a very talented actor and comedian never lets up in this film, and he can run the gamut of emotions and make the audience feel them. I laughed at Martin’s Clouseau, was annoyed by him, felt for him, thought he was cool, and ultimately cheered his slyly hidden intelligence. In a movie plagued by a pitiful script and absent direction, Martin made The Pink Panther live. This is a solid Steve Martin vehicle in spite of the dead air that stifles this remake.

And while Martin sparkles, his supporting casts works well with him. Although they start off cold, Kevin Kline (always game) and Jean Reno (looking a bit worn here) are fine straight guys for Martin’s relentless goofy and dense Clouseau. Kline is usually dead on as the straight guy, and here he plays the frustrated foil with self-confidence that is above this poorly constructed movie. Reno has a few good moments, though his character Ponton is just a sounding board for Martin’s craziness. However, he really gives a Clouseau/Ponton dance sequence a professional’s touch. He does it the way a good actor should – like he has to sell the performance both to the audience and to a guard who stands in the way of Clouseau and Ponton. There is actually some sexual tension and chemistry between Martin’s Clouseau and Nicole, played in a nice comic turn by Emily Mortimer. It would have been good to see more of that pairing in the film. Although she is a poor actress and it’s never more obvious than in this movie, Beyoncé Knowles is fine and pretty to look at, and that must count for something, right?

In the final analysis of The Pink Panther, Steve Martin makes this thoroughly mediocre film his star vehicle with a little help from his supporting cast. Here, as Martin so often does, he gets the hard laughs – sometimes bringing me to tears.