Disney Brings "The Black Cauldron" Back to DVD 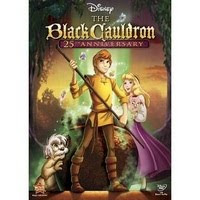 The film tells the story of Taran, an apprentice pig keeper with dreams of becoming a great warrior, who embarks on a quest to find a magical and powerful Black Cauldron before the evil tyrant Horned King can possess it for his own diabolical purposes. Fantastical characters like the oracular pig Hen Wen, the willful princess Eilonwy, and the droll but annoying Gurgi face witches, elves, magic swords and other obstacles. As they journey through these thrilling escapades, Taran begins to learn the true meaning of what it is to be a hero.

Exciting new bonus features for The Black Cauldron: 25th Anniversary Special Edition include a new game and a never-before-seen deleted scene as well as a new digital transfer.

New Bonus Features Include:
Deleted Scene—The Fairfolk: Viewers join Taran, Fflewddur Fflam, Gurgi and Princess Eilonwy as they travel into the depths of the earth and meet the Fairfolk.

The Witches’ Challenge Game—In order to defeat the dark powers of the Horned King, players must gain possession the magical sword from the Witches of Morva by solving their riddles.