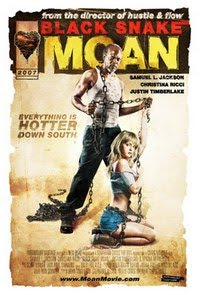 From the writer/director of the Academy Award-winning Hustle & Flow

song (“black snake” was the darkness coming over him), the film follows an embittered black man and a loose white woman coming together for some healing. In spite of the title, this pulp fiction is a blues-drenched tale featuring the kind of ordinary poor folks who stay out of sight and out of mind in our pop culture, but their pain and longing is familiar.

Blues musician Lazarus (Samuel L. Jackson) finds a white girl: half naked, beaten unconscious, and left for dead on the side of a road near his house. After taking her in, Lazarus learns that the young woman’s name is Rae (Christina Ricci) and that she is the town tramp from the small Tennessee town where they live. Lazarus nurses Rae back to health, but also decides to cure Rae of her wicked ways. He chains her to his radiator in an attempt to get her to slow down and contemplate the future. Desperate to resume her wicked ways of sex and drugs, Rae offers her body to Lazarus if he sets her free. He won’t, and she’s unrepentant. Now, who breaks first?

With the dark, throbbing beat of north Mississippi blues and Scott Bomar’s aching score behind it, Black Snake Moan

is a sensational film about sin, redemption, and human imperfection. It glorifies nothing, but proudly says that “it is what it is.” The movie is as odd as many classic 70’s exploitation films. Moan’s characters are like real people. They are fallen and sin often, but they certainly have a God-given right to redemption – to seek it and to attain it.

Brewer’s scandalous and audacious concept aside, he’s smart enough to write inventive, unique scenarios set in poor, rural communities, but even smarter to allow his actors to take these impoverished characters, setting, and plot to bring out the richness of their lives. Samuel L. Jackson is a dangerous, dark, bitter chocolate soul as Lazarus, who is righteous and is nursing a need to get some male vengeance. Christina Ricci is outrageous as Rae, a former abused child beset by a relentless, urgent demon that gives her a hard lust for copulation. Both make outrageous characters familiar because at their core, they just want honest love and friendship just as we all do.

In fact, the supporting cast is quite good. Justin Timberlake as Rae’s soldier boyfriend, Ronnie, shows a felicity for emotion and vulnerability; he reveals so much of the character in his eyes and through his emotive facial expressions. John Cothran as the Lazarus’ preacher friend, R.L., makes a nice God-fearing balance to Lazarus.

Brewer and his director of photography, Amelia Vincent, compose the film is a very deliberate fashion. This unconventional film is shot in a precise manner, which grounds the story and gives it an air of authenticity and realism. In the end, Black Snake Moan’s classical look allows the viewer to focus on this peculiar drama. By skillfully directing his cast and getting the best of his creative staff, Craig Brewer, makes the audacious, the unacceptable, and the forbidden palatable. The blues soundtrack and bluesy score also parallels the film’s intense yearnings and longings. You might find yourself laughing, but this tale of love, betrayal, sex, and liberation from pain is unforgettable because at the heart of the scandal is a familiar tale of wounded humanity.