Review: "Four Christmases" Kicks that Holiday Spirit in the Butt 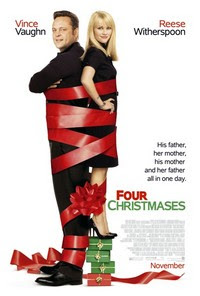 works because it connects crude laughs with the rudest joke of all – Christmas with relatives.

Brad McVie (Vince Vaughn) and his girlfriend Kate (Reese Witherspoon) are an upscale, happily unmarried San Francisco couple. Because both their parents divorced, they aren’t thinking about marriage, even after three great years of dating, nor have they visited their parents since getting together. After their Christmas vacation in Fiji gets sidetracked by fog, they become obligated to finally visit their parents. That means not two, but four stops, where childhood, adolescent, and family wounds are reopened and resentment thrives. Somewhere along the way, Brad and Kate reexamine their relationship and future.

There are five Oscar winners in Four Christmases: Reese Witherspoon, Robert Duvall, Sissy Spacek, Jon Voight, and Mary Steenburgen. Usually this might mean a poignant Christmas drama full of family and healing. Four Christmases is full of family and healing, but it’s damn funny. It’s also damn honest. Getting together with family over the holidays, especially Christmas, is worse than nightmare on Elm Street or any street. We tolerate the toad relatives because they come with some beloved family that we’re genuinely happy to see.

Vince Vaughn and Reese Witherspoon must be really good actors or their screen chemistry is the real deal. They are so good together that they should always be together, like a great screen couple. Vaughn performs his shtick to maximum effect, and Witherspoon is, as always, solid. Together, they make even this film’s turn towards serious relationship drama late in the story not seem phony.

Four Christmases captures the joys and the miseries of the holiday so well and with so many laughs that it is bound to be an impolite (but not boorish) Christmas classic. Also, watch for the always good Kristen Chenoweth doing some enjoyable scene stealing.