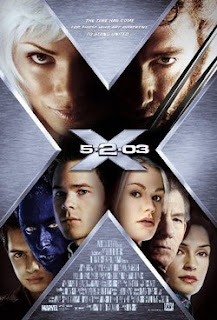 Once upon a time, a good sequel to a successful film was a big deal. Then, came a time that when a sequel surpassed the original, movie fans really had to take notice. X2: X-Men United, the sequel to the 2000 film X-Men

, blows its predecessor away. I’m not kidding. Once it was difficult for me to name five great films based upon superhero comics; hell, I would need to add movies based on any comic character just to come up with five decent films based on that genre. Now with Blade II

and this film, I’m in hog heaven; they’re signs that maybe good things can come from superhero movies. Let’s be honest: The Matrix is a comic book movie without actually being a comic book first.

In the new film, a mutant new on the scene, named Nightcrawler/Kurt Wagner (Alan Cumming) makes an attempt on the life of the President of the United States (Cotter Smith). A military scientist, General William Stryker (Brian Cox) uses that attack to spur the President McKenna into giving Stryker permission to initiate an attack on the X-Men. Stryker uses drugs to force the secrets of Professor Charles Xavier (Patrick Stewart) and his School for Gifted Youngsters out of Eric Lehnsherr/Magneto (Ian McKellan). While the professor and Scott Summers/Cyclops are off to visit Magneto and Dr. Jean Grey (Famke Janssen) and Ororo Munroe/Storm (Halle Berry) are off to find Nightcrawler, Stryker and an assault force attack the school where Logan/Wolverine (Hugh Jackman) is babysitting the students. Now divided, the X-Men must reunite and also find themselves with old foes Magneto and Mystique (Rebecca Romijn-Stamos) as allies in their war against Stryker. And the merry mutants must also discover the whereabouts of their professor before the evil Stryker uses him to unleash Armageddon on mutantkind.

X-Men director Bryan Singer returns for the sequel, but X2 is so much different from the first. It’s more fun, and there is lots more action. It’s an edge-of-your-seat, rollicking slugfest from beginning to end, filled with suspense and sci-fi thrills. The film is gorgeous. The sets, props, and special effects are tight. The costumes look good, seeming almost as natural civilian clothing; in fact the X-Men spend a lot of time in regular clothes, so they really do seem like regular guys (albeit with special powers) who are being harassed by dangerous jerks. Almost everyone in this film, from good guy to bad, is cool, beautiful, and stylish – always looking hip while in character. Even the hairdos are hittin.’

Best of all is the story. In the first movie, the story had a few glitches, some starts and stops, but this time, the screenplay is a lean, mean fighting machine. Every character, both large and small, plays his part to the hilt. Everybody counts, not like in the first film where many smaller parts seemed painfully extraneous. Every actor makes a point to make his moments on the screen count, and that gives the film a striking verisimilitude.

Dude! The writers unleash Wolverine. He kicks lots of butt, and Hugh Jackman seems to be having a ball doing it. He really gets to use those claws, and the bad guys get a taste of hot, adamantium (the metal from which Wolverine’s claws are made) rage. Nightcrawler is a very good character, and I expected a disaster when I first saw early photos of the character. Stryker and his killer companion Yuriko Oyama (Kelly Hu) are very good bad guys; they made me care, made me hope really badly, that they’d get theirs in the end.

Words won’t do this justice. This is a comic book fanboy’s dream: a great X-Men

movie – pure action, great adventure, thrilling suspense, and sci-fi as awe-inspiring as you’d find in some of the best science fiction films. If you liked the first one, you’ll really like this one. If you only had a passing interest in the original, that’s all the more reason to see the sequel. X2: X-Men United

could be the pinnacle of superhero films. I know I’ll be harping on its super goodness for a long time. It’s not totally dumb, the story throws the viewer a few tidbits to think about. But, really, just sit back and enjoy the ride.