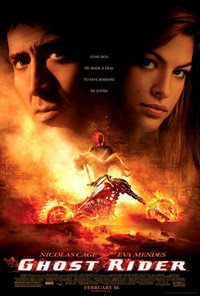 With his new movie, Ghost Rider, Mark Steven Johnson has written and directed his second mediocre film based upon a comic book (2003’s Daredevil

being the other). In spite of both Johnson and a comically amateurish performance by Nicolas Cage as the hero, Ghost Rider survives on visual effects that create some scary monsters and cool, disturbing images.

When he was a young man, carnival stunt motorcyclist, Johnny Blaze (Matt Long) sold his soul to the devil, Mephistopheles (Peter Fonda), in order to save his father, Barton Blaze’s (Brett Cullen) life, and that deal also cost Johnny his girlfriend, Roxanne Simpson (Raquel Alessi). Years later, Johnny Blaze (Nicolas Cage) is the world’s most famous motorcycle daredevil, but that other devil has come for his due. Mephistopheles is at war with his son, Blackheart (Wes Bentley), and he wants Blaze to stop Blackheart from finding something that both hellish father and son want – a lost contract of damned souls belonging to Mephistopheles.

To that end, Blaze discovers the gift/curse of power that Mephistopheles had given him for the price of his soul. At night, in the presence of evil, Johnny becomes the fiery, motorcycle-riding demon with a flaming skull, Ghost Rider. Although obligated to serve his dark master, Johnny is also struggling to rekindle his romance with Roxanne (Eva Mendes), now a TV news reporter, and she’s isn’t buying Johnny’s story that he is the mysterious Ghost Rider. Perhaps, the only one who truly believes Johnny and knows what he’s going through as Ghost Rider is the mysterious grave keeper, Caretaker (Sam Elliot), and Johnny Blaze/Ghost Rider will need Caretaker’s help as he takes on Blackheart and his demonic minions.

Mark Steven Johnson based his screen story and screenplay for Ghost Rider upon the Marvel Comics character of the same name. Created by writers Roy Thomas and Mark Friedrich and artist Mike Ploog, Ghost Rider first appeared in the comic magazine, Marvel Spotlight #5 (1972), and would later be updated for the 1990’s by writer Howard Mackie and artist Javier Saltares. For this new Ghost Rider movie, Johnson has borrowed elements from throughout the character’s publishing history.

Despite four decades of source material from which to cherry pick, Johnson still delivers a cheesy, superhero horror flick. Ghost Rider is of the same quality as one of those low-end Sci-Fi Channel original movies, except GR has the production and promotional budget of a Hollywood blockbuster and a big movie star as the film lead.

There’s nothing much to be said of Nicolas Cage’s performance in this film. He’s an admitted, serious comic book fan. Still, his sincerity and love of the material doesn’t wring from him, for Ghost Rider, the kind of great performances that won him an Oscar (Leaving Las Vegas) and earned him another nomination (Adaptation). Here, Cage does a kind of hammy riff on Elvis Presley, which, speaking as a fan of Cage’s work, is embarrassing.

However, when Ghost Rider (which is certainly a computer generated character) is onscreen, especially when he’s facing off against Blackheart (well played by Wes Bentley), the film is actually fun, though still cheesy. The fiery motorcycle stunts, the wicked villains, and the frightening (and occasionally) disturbing images – mostly generated by computer – are fun. Beyond fans of comic books and comic book-based movies, Ghost Rider may attract the attentions of action movie junkies and some fans of Cage. This is simply a mediocre movie, although Eva Mendes looks white hot in a form-fitting white dress, and that’s worth seeing.