Review: "Law Abiding Citizen" Has a Rage On 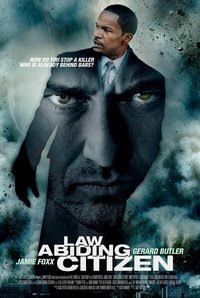 CRIME/SUSPENSE/THRILLER with elements of action and mystery

In the 1970s, movie studios produced what were called black exploitation, or “Blaxploitation,” films. The films starred predominately black actors and featured subject matter of interest to Black people, such as racism, violence, and crime, although not all Blaxploitation films dealt with those subjects.

I believe that there are also “Whiteploitation” films. I call them that because they are films that exploit the fears of White Americans, especially fears concerning urban crime and violence, particular crime committed against white people by brown people (African-Americans, Latinos, Asians, etc.) and lower class whites (white trash).

The recent film, Law Abiding Citizen, focuses on an assistant district attorney at odds with a criminal mastermind who virtually controls a city from the confines of his prison cell. This could be seen as a white exploitation film, exploiting issues of violent crime and a broken justice system in hopes of tapping into the resentments of its predominately white audience. While Law Abiding Citizen

initially deals with these issues, in a somewhat substantive fashion, it eventually morphs into a standard thriller full of violence and largely unfocused rage – again to appeal to the prurient interests of a young male audience.

In the film, Clyde Shelton (Gerard Butler) is traumatized by the brutal murders of his wife and daughter at the hands of two men during a home invasion. Nick Rice (Jamie Foxx) is the ambitious, hotshot, young prosecutor, assigned to the case. Nick offers one of the suspects a light sentence in exchange for testifying against his accomplice, but the criminal who gets the plea deal is actually the worse of the two. Rice ignores Shelton’s objections to this deal.

Ten years later, Shelton kills the two men who murdered his wife and child. Thrown into prison, Shelton begins a campaign of vengeance against the entire system. Soon, Nick Rice and the city of Philadelphia are held in a grip of fear, with authorities powerless to halt Shelton’s reign of terror. With police Detective Dunnigan (Colm Meaney) at his side, Nick desperately races against time to stop a deadly adversary who seems always to be one step ahead, even though he’s in prison!

. However, at the point when Clyde Shelton goes from righteous vengeance to acts of terrorism against society, the film loses what moral standing it had.

(shadowy figure holds city in grip of fear), the Jason Bourne movies (former operative uses special skills for payback), and the Saw franchise (torture and gruesome murder), with a dose Charles Bronson revenge movie. It’s entertaining and quite often it offers the kind of genuine stimulation a good, taut thriller should. But to second Owen Gleiberman of Entertainment Weekly, I no longer enjoy Gerard Butler’s “mush-mouthed bravura” (and only liked it for a little while). Jamie Foxx gives a good performance, but compared to his best work (Ray

), his performance here seems like only a dutiful effort to justify the large paycheck he received for this movie.

I also want to give the producers credit for hiring a perfectly capable African-American director and for giving us a satisfying ending.