Review: "Yojimbo" One of the Great Crime Comedies 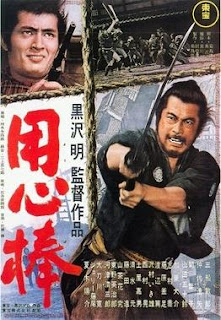 COMEDY/CRIME with elements of drama

Akira Kurosawa’s darkly comic film, Yojimbo, is without a doubt one of the great screen comedies. Despite it’s violent moments, the film is a hilarious tale wherein all the vices and all the things about man that we think of as wrong, are on display: wanton lust, naked greed, blatant envy, crude deception, consistent hypocrisy, murder, rage, and a whole lot more.

In the film, Sanjuro Kuwabatake, (Toshirô Mifune), a crafty ronin (masterless samurai) finds himself in a small village divided by two merchants, who more or less operate criminal gangs. Sanjuro decides that the only way to rid the town of the rivals is to get them to kill each other. Thus, he pretends to work for both sides, feigning indifference and interest in each side’s offer for his service, while they steadily kill each other. Two things complicate Sanjuro’s plan. The gun-slinging son (Tatsuya Nakadai) of one of the merchants arrives in town and, having the lone firearm in the village, easily begins to bump off rivals. The second thing is that Sanjuro frees an imprisoned wife and reunites her family which causes the gunslinger, Unosuke, to closely scrutinize Sanjuro’s role in the town.

Kurosawa’s film is one of the great contributions to cinema, one that so impressed American directors that Yojimbo was the template for many American hit films including the Clint Eastwood western, A Fistful of Dollars

. The film is on the surface hilarious, but on a deeper level is a careful examination of motivation, selfishness, and desire or want. Kurosawa also composed the film with brilliant wide shots that encompass a feeling of openness. This method seems to give the story and actors room to breath and to stretch, and that allows the story’s ideas to fully develop.

If I had to point to one thing that stands out about the film (and there are actually many), it is the energetic performances of the cast. They demonstrate such timing and rhythm that the performances are almost like a dance routine. Through voice, facial expressions, and movement, they truly bring Yojimbo